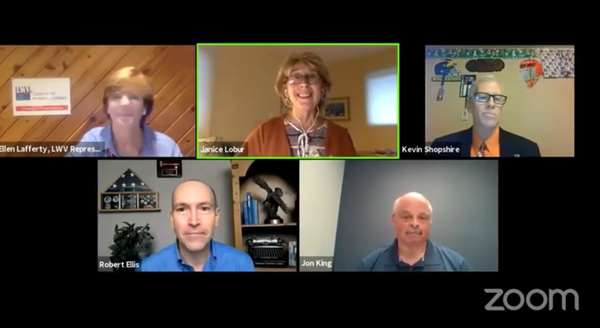 Only three of a total seven candidates took part in a recent Howell City Council and mayoral forum hosted by the League of Women Voters of Livingston County.

The mayor’s seat and three Council seats are up for grabs in November and WHMI’s Jon King moderated the forum. It featured incumbents Jan Lobur and Bob Ellis along with candidate Kevin Shopshire. Candidate Bob Parker, who is running against Ellis for mayor, declined to participate while candidates Lee Ann Blazjewski, Jacob Schlittler and Luke Wilson never responded. Councilwoman Jeanette Ambrose is no longer seeking re-election and earlier withdrew from the race for personal reasons. Of note is that if Ellis wins the Mayor’s race, then he’ll have to resign his council seat.

Each candidate delivered opening and closing statements and responded to a variety of questions accumulated from the community. Among them was recent controversy related to Melonfest and a drag queen bingo event in which the reputation of the Howell community once again came into question. Candidates were asked how much of a problem that is for the City and how can it best address the issues.

Shopshire said he thinks it’s a problem when trying to attract businesses and young people to the city including millennials – stressing Howell is a really great City with really great people but these isolated incidents happen and when they do, people just say that’s Howell or Livingston County and it pains him. Shopshire said he thinks a non-discrimination ordinance that was drafted will help and people need to just keep doing the right thing to effect change – adding if he had the answer, he’d be a millionaire.

Lobur commented that the City had a great Pride Parade in July, which was the first time it was ever done. She said the City also has an anti-discrimination ordinance, which is huge for Howell and other cities have been asking for it to model theirs after. In regard to the Drag Queen Bingo, Lobur said it has nothing to do with her opinion on whether or not it should have been in the City - it was about the way the Howell Area Parks and Recreation Authority or HAPRA presented it to the City. Lobur said Council approved the event application for the beer tent to be open until 10pm but the bingo was supposed to continue until 11:30pm – an hour and a half past the event and that’s where the problem came up. Other than that, Lobur said she has no opinion on it and thinks “it’s fine if you like it or if you don’t like it, however, it goes” but next year there will be an even better for Melon Festival.

Ellis stated that he thinks the vast majority of people in Howell are welcoming and inclusive. After the very successful Pride Parade, he said it made sense to try to expand Melonfest by adding something that would appeal to a more diverse population, and unfortunately, it kind of led to a hateful diatribe – noting most of the emails against it were from people outside of the City that were sending them hateful things. Ellis said 90% of messages they got were totally supportive of the event, so he thinks it’s a small amount of population of people that are prejudiced and has their own agenda, and they just need to tell the story of all the good things that are happening. He noted the City also recently hired a media relations person so hopefully, they’ll put out more good stories and help combat the reputation Howell has. Ellis said a lot of that is related way back to the KKK and the Grand Dragon who had a Howell mailing address but didn’t actually live in the City so they’ve been contaminated with that too.

Another question was related to an industrial scrap metal shredder that’s been approved and various environmental issues raised by businesses and residents. Candidates were asked how they propose the City balance the environmental impact with the safety and protection of citizens.

Lobur stated that Padnos is in an industrial-zoned area. She said the City has received many calls and staff has been very patient about educating the public about the project. Lobur said it will be enclosed on a paved cement pad and so far everything done by Padnos has been approved by the state and is a legal use of the project. She added that she knows a lot of people outside of the City don’t want it but thinks the City would have had a real problem to deny it and they’ll continue to work with Padnos and make sure they continue to get all needed permits and “everything is up to snuff”.

Ellis echoed the comments made by Lobur. He said the main thing is that Padnos is complying with all local ordinances and zoning requirements – noting it’s zoned for industrial use and there’s an auto recycling in the area already. He said regulation related to potential pollution and environmental issues is done at the state level and the City doesn’t have any legal authority to stop them from using that property that way – adding they already have needed state permits. Ellis said he definitely sympathizes with people concerned about noise and truck traffic and said the City is trying to pursue a state grant to try and improve Lucy Road so trucks can make it down there but other than being sympathetic, the City doesn’t have any legal authority to intervene at this point.

Shopshire commented the City has to follow its own ordinances and zoning and its industrial so basically, the City can’t just deny it because they don’t like it or they’ll lose in court and it will cost more money. He added that it’s hard for cities to survive on just a residential tax base; there needs to be industrial along with residential to support the services everyone loves.