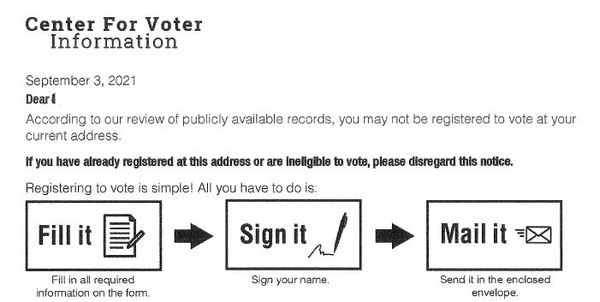 
A recent mailing that was received by residents in the City of Howell is causing some confusion among voters.

Clerk Angie Guillen updated Council at a recent meeting about the flyer that was sent out by The Center For Voter Information.

Guillen reported that the Center sent out a mailer that’s upsetting some residents and she just wanted to make Council aware. She said some residents were upset because they think they’re not registered to vote when they actually are. Guillen said she looked up the Center, which describes itself as a non-profit, non-partisan partner organization and she thinks they mean well but the way the mailer is worded is misleading.

The mailer states that “according to our review of publicly available records, you may not be registered to vote at your current address”. It also includes a Michigan voter registration application and other information.

The mailer can be viewed in the Council meeting packet. That link is provided.