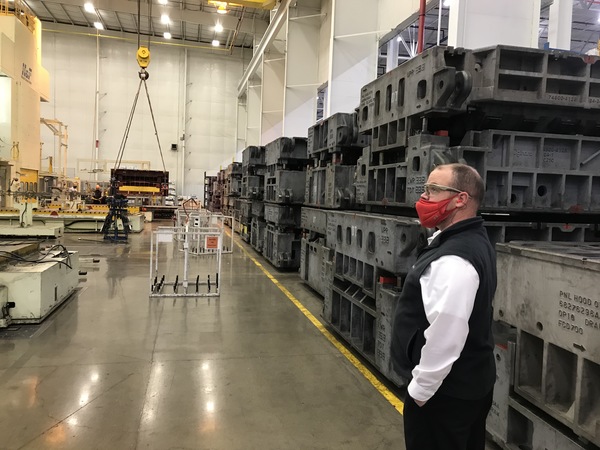 
Commuters along I-96 through the Howell area may have seen the large white factory that dominates the view along the freeway, just west of D-19. But most probably have no idea that one of the key automotive component makers in North America is located there.

Thai Summit America Corporation is one of Livingston County's largest employers with more than 700 workers. The Tier-1 automotive supplier makes a variety of sheet metal and aluminum car parts including doors, fenders, deck lids, roof panels, structural components, and undercarriage components. WHMI was recently given a unique opportunity to get a first-hand look inside the facility, escorted by Thai Summit's Human Resources Manager James Hogan, who grew up in Howell, and started more than 20 years ago working the line at what was then Ogihara Corporation.

“Two things I think are very cool about working here; we do a lot of unique parts. So we make parts for the Ram TRX. We make parts for the Ford Raptor. We make parts for the GT 350 and GT 500 Mustangs. I mean, those are cars that when people see them, they stand out and I can say ‘Hey, we made the hood for that, we made the fender for that, we made the deck lid for that, whatever it is. And so I think that is very unique and cool to our facility. The other thing is that as we walk through this facility, there’s a lot of people that I know that I started at the floor with. Now many of us are maintenance technicians, department managers, executives, engineers. So it’s impressive to see the progression of your friends that you grew up with in the facility. There’s a lot of opportunity.”

The original factory was built in 1985 by Ogihara, a Japanese-based auto parts manufacturer which picked Howell for its first automotive stamping operation in the U.S. When Thailand-based Thai Summit Group bought a controlling stake in Ogihara in 2009, the facility had grown to about 800,000 square feet. Follow-up expansions have grown the factory into a 1.2 million square foot facility that sits on 152 acres of land, located off of McPherson Park Drive at Mason Road.

Thai Summit Group is a family-owned global manufacturing company headquartered in Samut Prakan, Thailand. In addition to its two U.S. facilities, in Howell and a smaller factory in Kentucky, it also maintains operations in Malaysia, Indonesia, Vietnam, China, India, and Japan.

As Hogan walked through the plant he explained the purpose behind each section of the massive facility, which receives steel and aluminum in two forms; in coils or in sheets, called blanks. Hogan says their job is to turn those coils and blanks into automotive panels. To do that, they use two types of presses; tandem presses in which multiple operations are performed on the material within the press itself; and transfer presses, in which automation moves the parts to different points inside the press until the piece attains its final shape.

Hogan estimates they make about 250 different parts for a variety of automakers, including the Detroit Three. Up to 80 of those parts are for the Ford F-150, with Thai Summit serving as the #2 producer of aluminum auto parts behind only Ford Motor Company. The company has to run two assembly lines to keep up with F-150 production, which is Ford’s top-selling vehicle.

Hogan says a starting worker with no experience starts at $15.25 an hour, plus a shift premium and what he called “top-notch benefits” with the company picking up over 90% of those costs, which he said is way above the industry standard. Despite that, he says like many employers, they have had trouble attracting workers during the pandemic, primarily due to the federal unemployment benefits. Hogan says it was entirely understandable why many people chose to remain at home when the virus was surging and the vaccine had yet to be introduced, but he’s hoping that with the COVID situation improving and the federal unemployment benefits coming to an end, they can begin to return to normal work levels.

Hogan says the impact of the global computer chip shortage produced an interesting challenge in that while some automakers have had to cut back on their orders while they wait for the chips; it was matched by a lean labor market. He called it a “one-two punch” scenario that essentially offset itself.

Looking to the future, Hogan says one area he thinks sorely needs attention is in providing more opportunities for skilled trades training for those high school students in which a four-year college degree is not always practical. As we watched an employee manually inspect engine hoods as they came off the line, he said automation will continually advance and it will be the workers who have experience in that field who will have the leg up.

“As we progress into the future, and this is just technology (and) and the directions it's going and the limited workforce, there are vision systems we can put on robots that will literally look at this panel as it sits there and be able to tell you if anything is wrong with it. And really the future is going to be the guys who know how to work those vision systems, those robots. You know, this is kind of the same thing my Dad told me 25 years ago; this is the future where you need to get into.”

You can hear more from Hogan and get an inside audio tour of the factory this Sunday morning at 8:30 on WHMI’s Viewpoint. Here is an excerpt: