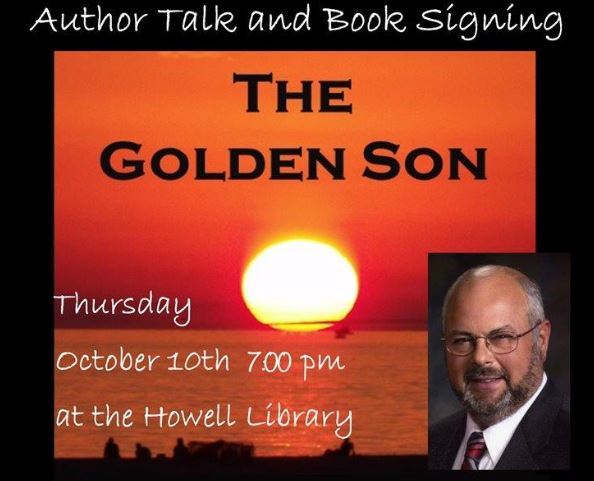 A Howell-native who has authored 2 novels is coming home for a special book signing.

Scott Ginsburg has family roots in the Howell area dating back to the 1930s when his family ran an auto-parts business. Long-time listeners to WHMI may remember a young Scott on the air from the fall of 1970 through the early ‘80s, doing field reporting on high school football games and spending time in the DJ booth. Ginsberg grew these communications skills and transformed them into a successful career writing national radio television commercials, executive speeches, and corporate presentations. Following that 36-year career, he has spent his time in semi-retirement writing two novels- The Golden Son, and Tales from the Starbrite Motel.

His first book, the Golden Son, is a murder mystery entwined with a love story, set in Michigan during the time of the Vietnam War. Ginsburg said he began writing it in 2008, and after eight years and eight re-writes, released it in 2016. He said he learned that it was a process writing a book. “There were days when you were blocked and couldn’t come up with a good idea to save your life.” He then compared that to other days when he would start at 5am and have “phenomenally productive” days writing into the night. But overall, he compared writing his first book to “extracting your own wisdom tooth with a pair of vice grips. It was challenging.”

Ginsburg’s second novel, Tales from the Starbrite Motel, released this year, and was an easier write. He said the idea for Motel fell into his lap when his son, who works at a former mom and pop motel in North Carolina, was telling him stories of the many curious by-the-week renters who stayed there. Ginsburg asked for permission to fictionalize them and says the whole experience was much easier with lighter, more fun material to work from.

Ginsburg, who has lived for the past 33 years in the Raleigh, North Carolina area, is coming back up north on October 10th for a special book signing event at the Howell Carnegie District Library. He called it a “force of nature” in wanting to return to one’s roots later in life and re-connecting with memories of childhood. Ginsburg will be bringing with him 30 copies of The Golden Son to sign and sell, from which he said all proceeds will go to the Howell Archives to help support their work. He called the Archives an incredible organization and credit to the community for keeping memories of the past alive. Both novels are available on Amazon in paperback and on Kindle. (MK)