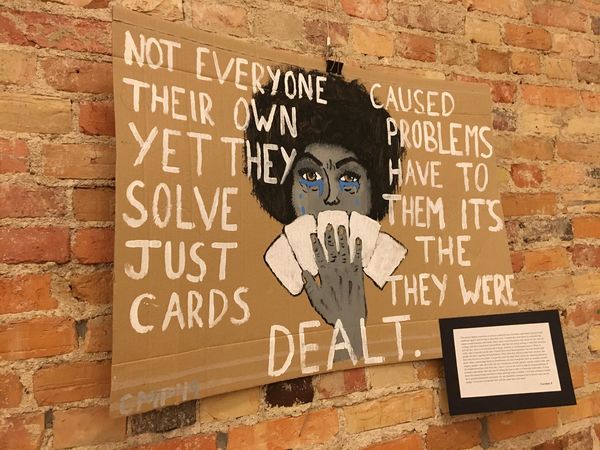 The Homeless Continuum of Care Committee drew attention to Homeless Awareness Week with an event featuring student artwork and personal stories, all with a unique perspective on what it means to be homeless.

The HCCC’s Main Awareness Event was held at the Howell Opera House Wednesday with a goal to educate the community about the effects of homelessness in Livingston County. Art pieces created by local students were on display, showcasing the artists’ depiction of homelessness and a call to action. Terri Ariss is a member of the Homeless Continuum of Care Committee and says this year’s theme of the Homeless Awareness events in Livingston County is "No Place Like Home". Ariss says, "The event...was dedicated to bringing stories out of what people have experienced while they were homeless in Livingston County. We're hoping to make change, we're trying to raise funds at the same time as creating awareness so we can supplement programs in some way, somehow."

Event organizers say that Livingston County does offer numerous resources that include homeless programs and services, which was noted by several individuals who spoke at Wednesday’s event as they shared their story of becoming homeless and how those resources helped them get back on their feet. One of the evening's presenters was Jessica who, having grown up in an abusive and drug-fueled household, later fell victim to addiction and became homeless. Still battling demons herself, Jessica then lost someone close to her while still trying to create a stable life for her child.

Jessica eventually found help in securing a job and affordable housing through the HCCC and says she's grateful for those around her who advocated for her and her child along the way. Jessica says, "There's still a lot of struggle but having our basic needs met has come a long way. I'm able to own a business, I actually home school my daughter now...but the main thing is that I felt alone. I was alone. And now I do have a community and I do have friends."

Ariss reports that between January 1st and December 31st of 2018, there were 618 occurrences of both literal and at-risk cases of homelessness in Livingston County. There were also 66 homeless veterans and 357 homeless students. 100% of the proceeds from the HCCC’s Main Event will go to support homeless programs in the area. (DK)