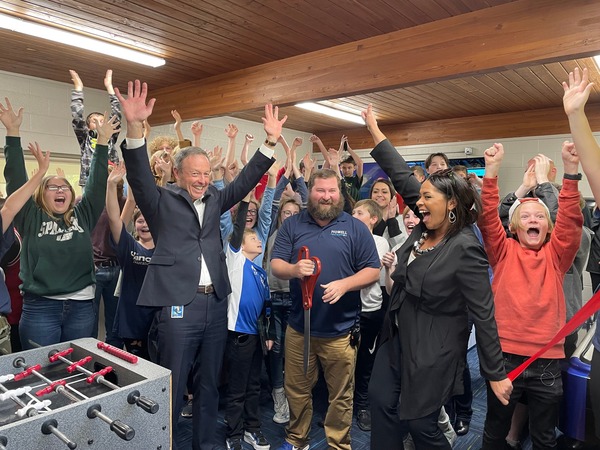 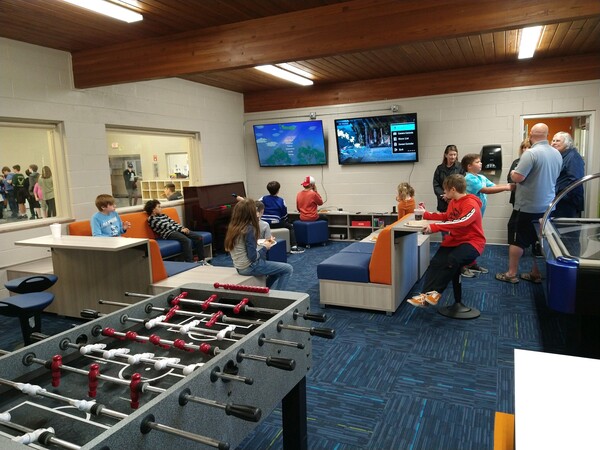 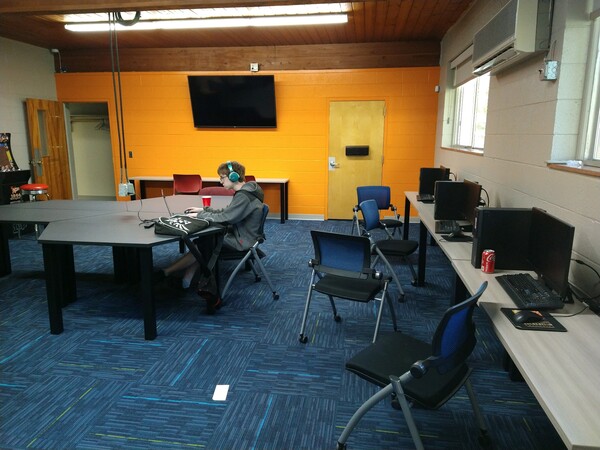 
A recent ribbon-cutting ceremony to celebrate renovations to Howell’s teen center was well attended by a very enthusiastic crowd.

The Hive Youth & Teen Center provides a safe, inclusive, and interactive environment for youth and teens, ages 3-18, from Howell and the surrounding areas. The teen center is used for middle and high school students to gather with friends, work on homework, and learn new skills in a safe space designed just for them.

The Howell Area Parks & Recreation Authority received a $40,000 grant from Citizens Insurance to renovate the center, located in the Bennett Recreation Center off Grand River. It now houses all youth programs, as well as pre-school and day camp programs.

The Hive was closed for over a year during the pandemic and staff set out to re-open their doors last fall in a new location. During that time, they were able to transform the space to be more attractive and engaging for teens.

Youth Services Manager Kevin Troshak says the grant specifically helped them to redesign the Study Lounge and add computers, Adobe software for digital design and video editing, along with Chromebooks and new furniture that was more conducive to schoolwork. He says the center offers a variety of courses for youth – from leadership programs to cooking and nutrition to workforce development, and more. It also provides large recreation spaces, a creative lab and many volunteering opportunities, as well as guest speakers and special events.

Troshak noted it also now a very cohesive center with new spaces that kids didn’t have access to previously.

One new room that was previously used for storage is now a new café/lounge with a coffeehouse feel that offers kids a quieter space to either listen to music, read books, do homework, or eat and generally not be in the louder rooms at the center.

Another room that was revamped will serve as a new Esports Arena, which is a fast-growing sport and staff expects it will be used whenever their doors are open. Troshak said they’re now working on fundraising and grant writing for new computers as the current ones are outdated and not suitable for online gaming.

A separate grant obtained by teens from the Ralph C. Wilson Foundation netted $20,000 for a room that offers hands-on experience as well as small business experience. It has new cabinets, counters and equipment, donated sewing machines, a button maker, t-shirt printers and a laser engraver on the way.

The building was originally built in 1965 as a youth and teen center and was primarily used for the City’s rec and senior center for a long time. Once the new center was built, Troshak said they were able to bring all their programs under one roof. In doing so, he says they now have the capability for kids to grow up in a center designed specifically for them - starting with preschool at age 3 all the way up to 18.

Troshak said the grant gave them the opportunity to give the building a facelift and make it more youth-friendly.

Troshak said “The Hive has something for everyone. We always get input from our participants before adding any big projects or programs to the center. They're the ones that know what they want so it's up to myself and the staff to listen and try to make those things happen. Adding these new renovations not only expands the space of the center but expands what we are able to offer as well. The study lounge and Esports Arena were both areas that our teens told us were lacking in the center, and with the support of this grant we were able to bring those suggestions to life! The Hive is special because it is an open and inclusive space teens in the community can truly call their own, and I think that's very important that teens know how supported they are by their community”.

Citizens Insurance President Paul Mueller told WHMI they are proud to partner with HAPRA to help sponsor the new teen center, which is really at the heart of how they think about supporting communities and their mission around youth and education. He said “Our company places an importance on supporting youth and empowering the difference makers who support them, and the team at HAPRA is doing just that with The Hive. We are excited to see the important and positive impact it will have on students in our community for years to come”.