The Heartbeat Of Howell's History Passes Away 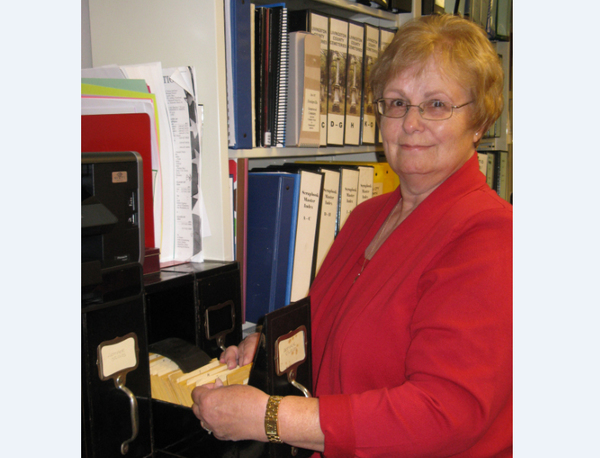 
A leading light in preserving the history of the Howell area has passed away.

Joyce Fisher died Sunday at her home, after a battle with lung cancer. She was 70 and had been receiving hospice care after getting a diagnosis about a month ago. Fisher was the driving force behind the Howell Archives. Located in the lower level of the Howell Carnegie District Library, the Archives houses approximately 1,000 alphabetically filed subject boxes with everything from original property abstracts to Howell High School Yearbooks dating from 1905.

Joyce was the longtime volunteer coordinator of the Archives, working for many years alongside Duane Zemper, whose devotion to Howell and its history was honored with a memorial statue in front of the library that Fisher was instrumental in creating. In fact, she was the 2009 winner of the Duane Zemper Award, created in 2008 by the Howell Carnegie District Library Board of Trustees to honor those who bring “positive attention and extraordinary support to the library.” She was also the 2012 Fantasy of Lights Grand Marshal, along with her husband. In addition to that, she was active with the Howell Historical Society, the Howell Opera House, and the Howell High School Alumni Association.

However, it was Fisher’s devotion to area veterans that was her true passion. At last week’s Howell City Council meeting, as word had circulated Joyce was in hospice care, Mayor Nick Proctor noted that fact, calling her a “pillar of this community,” saying she has been “very active” with the Veterans Administration, as well as the American Legion Devereaux Post 141 in Howell and the local chapter of the Veterans of Foreign Wars. Proctor added that Fisher for many years had coordinated Howell’s Memorial Day Parade for the American Legion as well as the pictures of veterans that were posted in the window of Cleary’s Pub each year for Veterans Day.

“That was all Joyce Fisher…(who) has done a lot for the City of Howell, the Howell community. She loves this town and she’s done a lot to move it forward and to preserve our history, so I can’t say enough kind words about Joyce Fisher. I look at Joyce, and I look at Howell. She is Howell.”

Fisher was also involved with the Veterans Day luncheon at the American Legion post, coordinating the Veterans Day Salute at Howell High School with the school’s Leadership Class as well as working with Honor Flight Michigan.

Rick Scofield, a community leader who worked with Fisher, said she "carried on the tradition of caring about the community and its history that was started by Zemp and the other archive founders. We as a community will be forever grateful for her help in keeping us connected with our earlier generations."

As to the future of the Howell Archives, Howell Carnegie District Library Director Holly Ward-Lamb told WHMI that has yet to be determined. “Joyce loved Howell. She leaves a legacy of service to her community and to veterans. The Howell Area Archives has always been a volunteer-run organization. The list of community members who gave their time to preserve the history of Howell is long. Recently, Joyce was the heartbeat and backbone of the Archives. While I can’t tell you exactly what the next chapter of the Archives will be, I can say that there will be one.”

Funeral arrangements are being handled by MacDonald's Funeral Home in Howell, but according to her wishes, there will be no ceremony. However, contributions in her memory are requested to the Howell Education Foundation.

Fisher leaves behind her husband of 51 years, Jim.