Health System Vaccine Mandate "Not A Factor" In Understaffing 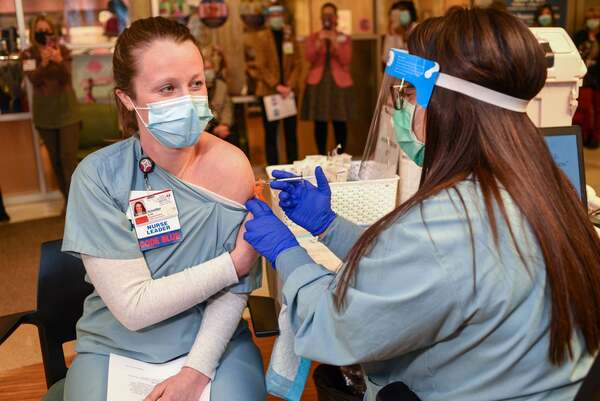 
As St. Joseph Mercy Livingston Hospital (SJML)in Howell continues to deal with the perfect storm of overcrowding and understaffing due to the pandemic, one of the persistent talking points among those trying to downplay the crisis is that the reason for the thinly-stretched staff is a vaccine mandate issued by the hospital’s parent company, Trinity Health, in July.

However, the man responsible for overseeing that staff says that simply is not true. SJML President John O’Malley says the mandate, which was issued to help stop the spread of the virus, has only resulted in about 1% of their nursing staff leaving.

“That's not the reason at all. We were able to provide our staff also with certain exemptions that have helped a great deal,” said O’Malley. “So if some of the nurses were looking at perhaps getting pregnant in the next year, that was one exemption that they availed themselves to, and there were certain religious exemptions that they availed themselves to as well. So, I think we were able to really collaborate nicely, as all of Trinity Health has done, with our staff. It is not a factor.”

What has been a contributing factor is the number of nurses who have retired based on the continued long hours and heavy workload that the various surges of the virus have created. That was a factor cited by every nurse WHMI spoke with when we visited the hospital last week.

Laurie Cortez is a Surgical Pre-Op/Recovery Charge Nurse who says four of the 22 nurses in their unit have either retired in the last year or transferred out, with the vaccine mandate not the issue.

“We've had a couple of nurses retire early, and then some of them went to other units that they could rely more on a predictable out time,” said Cortez. “It's difficult for our nurses with younger kids. They want to get home for meals with their family and, you know, games and whatever their kids are involved in. So it's difficult for them to plan when they may or may not be home.”

For those nurses who remain on the front line, it has become ever more difficult as they see patients who don't believe COVID-19 is a threat and end up in the hospital needing care because they have remained unvaccinated. “We’re tired," she said. "Yeah, we’re tired…We do it for our patients, we do it for each other, but we’re tired.”

WHMI's tour of SJML Hospital will be featured this Sunday at 8:30am on WHMI's Viewpoint.