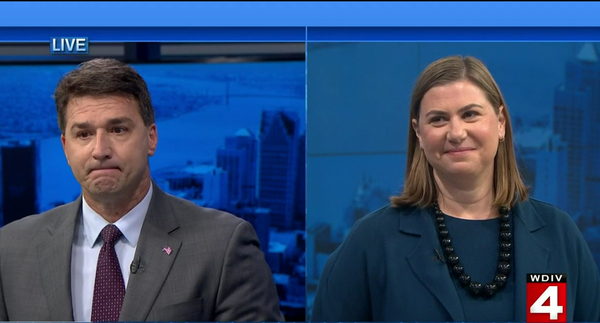 
The candidates battling for the 8th District seat in Congress had another chance to face-off against each other Sunday, with health care again taking a central role.

8th District incumbent Democrat Elissa Slotkin and her Republican challenger Paul Junge appeared Sunday on WDIV’s Flashpoint program. Slotkin, of Holly, is seeking to be re-elected to a seat she managed to flip into the Democratic column in 2018 for the first time since 2000. Junge, of Brighton, continued to make his case why voters in the district should return the seat to Republican control with an attack on Slotkin’s image as a bipartisan lawmaker, Junge again cited the statistic that Slotkin votes 96% of the time with House Speaker Nancy Pelosi while adding that she had voted 100% of the time with the Democratic majority on the final passage of House bills. Junge further mentioned her vote to impeach President Trump as being out of the step with the district. Slotkin defended that vote, saying that she knew it would be controversial and went into it knowing that it could end her career, but that “there has to be something more important than just voting to keep yourself in office.”

On the issue of trade, Slotkin said she gave the President credit for taking on China, but likened the tariffs he imposed on U.S. manufacturers and farmers as the “cure being worse than the disease.” Junge defended the President’s trade policy, saying that he deserved more credit than he was getting. "The President didn't abolish trade between Mexico and Canada, he improved it by putting America first. The President hasn't abolished trade with China. He has recognized that they cheat on these things. That they're stealing intellectual property and that they make this country vulnerable when we allow prescription drugs to be almost, so expansively produced just in China."

But it was on health care that the tersest exchange took place. When asked about the GOP’s inability to propose a viable alternative to the Affordable Care Act’s prohibition against pre-existing conditions, Junge discussed the high cost of insurance premiums and mentioned the example of Slotkin’s mother, who died from ovarian cancer which Slotkin says might have been discovered earlier if she had insurance, but could not afford because of a previous run in with cancer.

Slotkin said Junge was missing the point entirely of that story. “If you’re going to talk about my mother’s case then you shouldn’t talk about it without knowing anything about it. My mother’s case wasn’t that she couldn’t afford health insurance because of undue regulation. It’s because she had a pre-existing cancer that she had had 30 years ago and that forever and ever and ever, every insurance company felt they could gouge her and charge her a thousand dollar a month and a ten thousand dollar deductible. Please don’t speak about my mother as if you understand what made her health care unaffordable to her.”

Slotkin then continued her attack, asking Junge why he hasn’t brought forth specifics of a plan he would support. “And I think it’s crazy that every time we ask you specific details about the thing that really helps people know that they’re going to protected, their kids are going to be protected, you deflect and start attacking me and raising my mother? Come on Paul, like this is about being a big guy and running for Congress. If you’re going to do it, do it right and tell people how you’re going to protect them and not some throw-away talking point, but a real plan.”

Junge remained on task with his answer, returning to high-cost premiums as a major impediment to health care access. “Congresswoman, thank you for that opportunity. Listen, I didn’t bring up your mother’s health care. I think everyone appreciates that you loved your mother and that you were sorry to see the challenges that she faced and I am in no way disparaging that. What I’m addressing is that the problem of people who let their coverage lapse often has to do with the affordability of health care and so I’m trying to talk about how we can address that issue, not just for people in your family but for people in families across the 8th District.”

Slotkin and Junge will have one final opportunity to face off against each other on the issues on Tuesday, October 6th at 7pm at Cleary University in Genoa Township. That final event is being put on by both WHMI and The Livingston Post.

Due to COVID-19 restrictions, there will be no live audience members at the event itself. However, it will be aired live on WHMI 93.5 FM, while The Livingston Post will be providing a live Facebook stream of the event.

8th District residents with questions for either candidate are asked to email them to news@whmi.com for possible inclusion in the broadcast on the 6th.