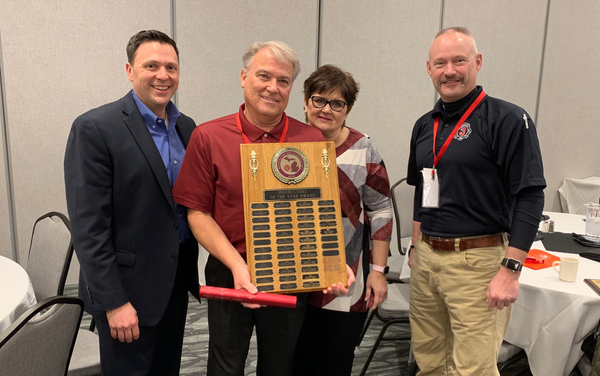 A member of the Brighton Area Fire Authority (BAFA) and head of the Howell High School Fire Academy has been named the Fire Instructor of the Year.

The Michigan Fire Service Instructors Association held its annual meeting Friday in Traverse City and recognized Lt. Tom Kiurski as the Fire Instructor of the Year. BAFA Fire Chief Mike O’Brian says Lt. Kiurski is very deserving of the “huge honor”, but that it only scratches the surface of all he has done.

Kiurski for nearly 30 years is said to have demonstrated a passion for developing firefighters. He came to BAFA in 2012 after retiring from the City of Livonia and has been teaching at various academies since 1989. Kiurski’s approach to education is described as “a unique blend of para-military into high repetition” through his passion for high skill level mixed with tenacity.

In leading the Howell High School Fire Academy, O’Brian says Kiurski has influenced a change with the cadets that goes far beyond the program, which is now in its seventh year. The HHS Fire Academy that completed in May of 2019 passed the practical and written portion of the certification exam with a 100% pass rate, which O’Brian says speaks to Lt. Kiurski’s commitment to excellence. O’Brian tells WHMI he has enjoyed watching Kiurski build not only firefighters, but also good civil servants and human beings in working with the academy’s students.

It is uncertain how many cadets Kiurski has influenced over the years, but some of his first academy students are now looking at retirement. O’Brian says it’s hard to believe that his passion has extended for so long and over such a large area. (DK)