Hay Fire Forces Closure Of US-23 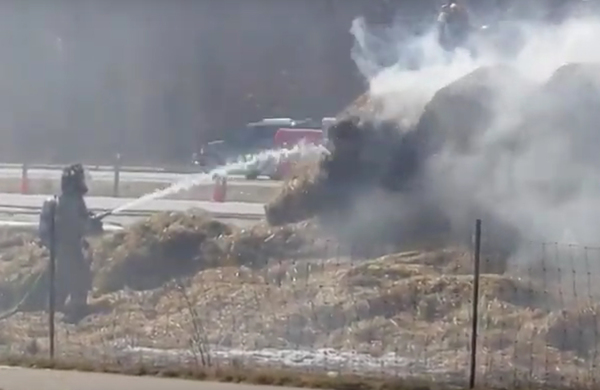 A portion of US-23 was closed Wednesday afternoon after a truck hauling hay caught on fire.

It happened around 2pm on northbound US-23 in the area of Silver Lake Road when a pick-up truck hauling a trailer full of hay bales caught on fire. The trailer was said to be fully involved when crews arrived on scene. The Green Oak Township Fire Department responded, with the Northfield and Hamburg Township Fire Departments assisting on scene. Green Oak Township Fire Chief Kevin Gentry tells WHMI they were called out for a hay trailer on fire. He says it was a fifth-wheel hay trailer carrying round hay bales and caught on fire for unknown reasons.

Gentry says the freeway was closed for over two hours until a large tractor could be brought out to break up and move the hay. Traffic was initially being detoured off the freeway at Silver Lake Road and then onto Fieldcrest Drive. The median shoulder was later opened to get traffic through but backups stretched to Barker Road. The scene was cleared around 4:45pm, although some residual back-ups remained as the evening commute got underway.