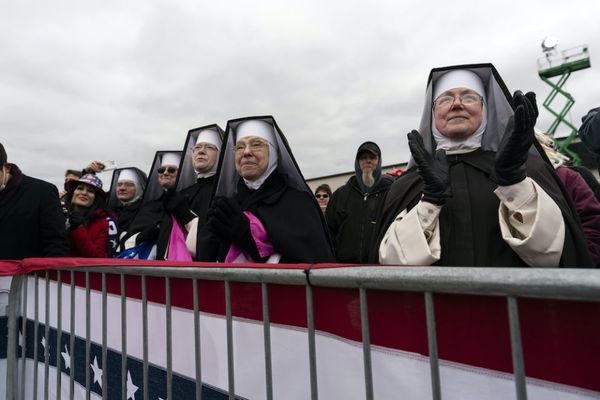 
A group of women from Livingston County who dress as nuns and gained notoriety as supporters of former President Donald Trump, are not nuns at all, at least not those recognized by the Roman Catholic Church.

An article Wednesday in the National Catholic Reporter (NCR) says the women, who go by the name of, "The Dominican Sisters of the Immaculate Heart of Mary" are based in Hartland Township, but according to a spokesman for the Diocese of Lansing, "do not have canonical standing within the Church." The paper says that the Leadership Conference of Women Religious and the Council of Major Superiors of Women Religious, the two associations of Catholic women religious in the United States, also confirmed that the Dominican Sisters are not members of either body. In addition, they are also not listed in the Official Catholic Directory, which the NCR says is, "the only authorized directory listing official Catholic institutions and organizations."

The women most recently made headlines when they appeared at a rally held by then-President Trump last October in Waterford Township in which the former President referred to them publicly. The order's website has many pictures of the women, dressed in full habits, at prayer in a chapel and work around a farm. But otherwise it contains very few details about the group, other than to say their "primary objective...is to restore and preserve the traditional Dominican conventual life in the United States."

Because no phone number or email address was listed, NCR was unable to obtain a comment. However, the paper did note that in one of the pictures of the chapel, there is a flag, "bearing the arms of the Holy See under sede vacante, used after the death or resignation of the pope, or by traditionalist groups that do not accept the validity of the pope."

The website also contains a donation link. While the group is listed at an address off of M-59 in Hartland Township, it is registered as a foreign nonprofit corporation with a Connecticut address.

NCR also spoke with Mercy Sr. Sharon Euart, executive director of the Resource Center for Religious Institutes, who said that when people present themselves as religious with no recognition by the church, "it's a misrepresentation and can cause scandal on the part of those who believe that they are legitimate and recognized religious in the church."