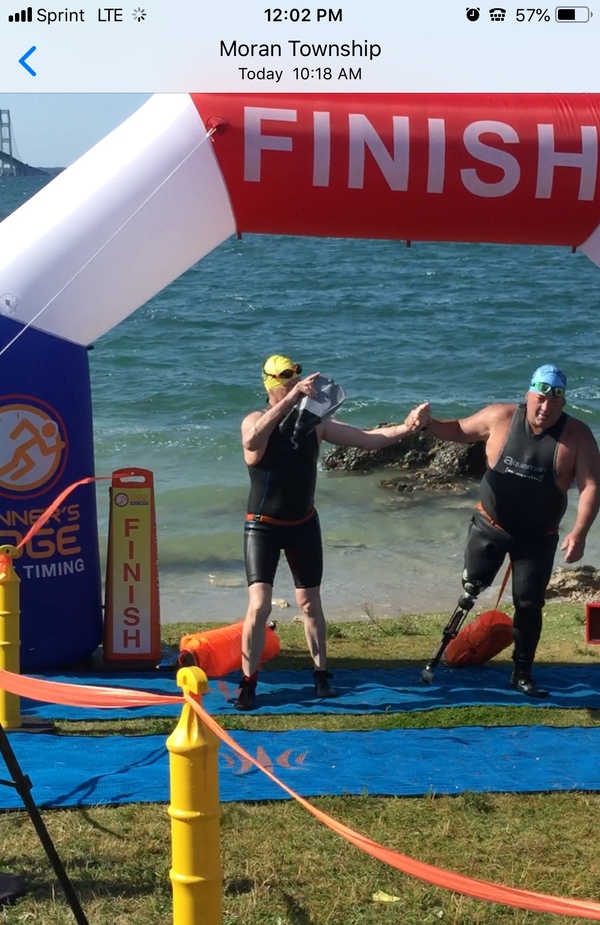 A local swimmer has become the first amputee to make the swim between Michigan’s two peninsulas.

Mike Henry of Hartland completed the annual Mighty Mac Swim across the Straits of Mackinac this past August with 400 others. The Mighty Mac Swim is recognized as the Michigan Open Water Championship by both the World Open Water Swimming Series and the Global Swim Series. It originally took place in 2007 in conjunction with the Mackinac Bridge’s 50th anniversary, before returning in 2015, and now becoming a yearly event. But what sets Henry apart from this year’s record class of participants, and the near 400 that have completed the swim in previous years, is that he did it with only one leg. The 50-year-old lost his right leg in a snowmobiling accident in 1981 but says that he has never let that hold him back. He swims regularly at the Hartland Aquatic Center where he learned about the swim from another member and took up the challenge of training for it. Six members in all from the center took part in the swim.

For the event, swimmers are ferried 300 yards off the shores of Mackinaw City. They swim to shore, run along it to a starting a line, then dive back into the water swimming north for 4 miles alongside the Mackinac Bridge to the finish line at St. Ignace. Henry said he never doubted his ability to complete the swim. He said he never questioned why he was doing it, and while it was as difficult as he imagined it might be, Henry said it wasn’t really anything different than what he was training for.

Henry said the biggest challenge was actually getting his prosthetic leg back on after 3 hours in the water. In swimming the race, he also raised $2,500 for a friend’s cancer charity. And while he’s not looking to compete in the Mighty Mac Swim next year, Henry said he is looking at other, similar-style events to conquer in the state, like in Harbor Springs, or the Swim to the Moon race, at the Pinckney Recreation Area. (MK)