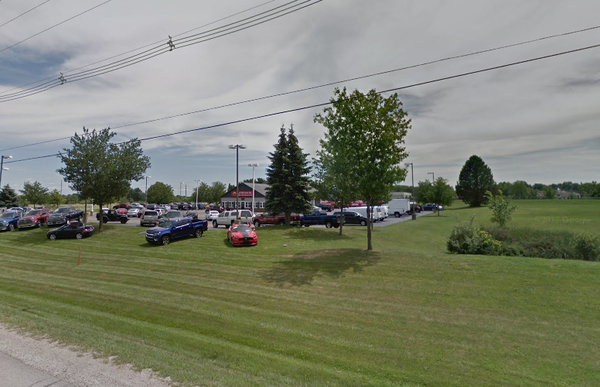 The Hartland Township Planning Commission made a use determination on a business that sells utility farm and landscaping equipment.

Ryan Wurtzel helps run a chain of family-owned Kubota-Bobcat dealers across the state. He was in Hartland Township Thursday night as the Planning Commission discussed the possibilities of a new location opening up on Highland Road across from Target. The parcel, which is zoned General Commercial, formerly housed a used car dealership (pictured) owned by LaFontaine Used Cars of Hartland. LaFontaine has relocated and the property is currently unoccupied.

Earlier in the day, Planning Commission Chairman Larry Fox had driven by the Wurtzel’s Saginaw location, took pictures, and had some concerns. The Saginaw store had attachments, pallets, and tire stacks outside, which Fox sad would not be allowed in General Commercial.

Wurtzel said their Jackson store was a better model for what Hartland would be. A street view of that location showed a more traditional tractor sales store that many Planning Commissioners said they would be okay with it. The Planning Commission made the decision that the Wurtzel’s business would be considered similar to that of an auto sales and repair business. Under General Commercial zoning, this requires a special use permit. In that process, the township can establish criteria and limitations of what will be allowed. Other concerns voiced included the sizes of the vehicles, and the worry that they may begin creeping off of paved areas and onto the grass, which is not allowed. Public hearings will be a mandatory part of the special use permit process, which Wurtzel will now begin to work on. Picture courtesy of Google Street View. (MK/JK)