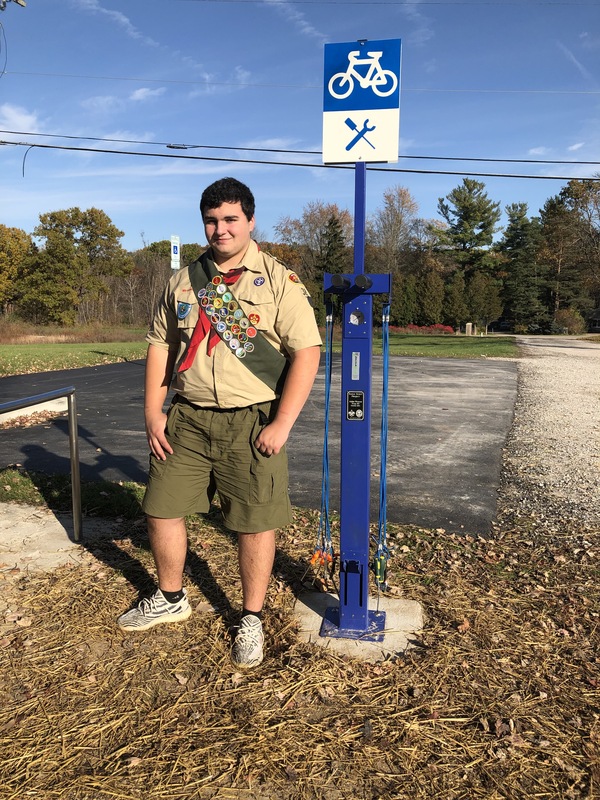 
A teen’s Eagle Scout project will provide bicyclists at a local park the opportunity to keep on riding even if they encounter a small mishap.

When 17-year-old Aidan Weaver of Hartland Township was trying to think of a project he could complete to obtain his Eagle Scout rank, he knew that he wanted to do something bicycle-related as he enjoys both scouting and bike riding.

After talking with his church’s youth group leader, Tom Hermann, Weaver decided to construct a bicycle repair station at Settlers Park in Hartland Township. Hermann is a member of the Motor City Mountain Biking Association who helped create mountain bike trails at the park.

Weaver, a senior at Hartland High School, presented his proposal to Hartland Township’s Director of Public Works, Michael Luce, and the Parks and Recreation Committee for approval and a land-use permit. He then began a bottle and can drive in order to raise the necessary funds for the project.

After several months, he was able to raise enough through the drive and from donations from family and friends to purchase the unit and the necessary supplies to install it. Weaver then led a team of fellow scouts and friends on two separate days, first to install the concrete base, and then to install the unit.

The bicycle repair station will allow riders at Settlers Park access to the tools needed to, among other things, inflate a flat tire, tighten components, or adjust brakes. The station is located near the park’s pavilion and Weaver hopes that it will be of great use to everyone who visits.

He is also working on obtaining his private pilot license, and after graduation, wants to pursue a degree in aviation and possibly a career in the military.