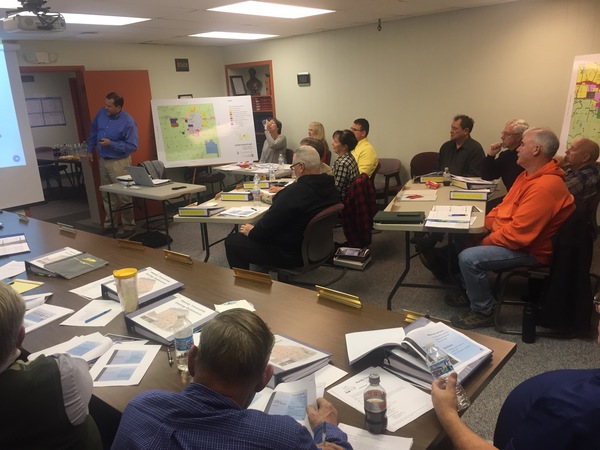 A workshop for Handy Township officials delved into the roles and responsibilities of each governing board in the municipality.

The event had perfect attendance from all members of the township’s Board of Trustees, Planning Commission and Zoning Board of Appeals. The workshop was led by Township Planner John Enos and the township’s attorney, Mike Kehoe. Enos noted the refresher course on planning and zoning basics was beneficial, as about half of the members of the planning commission and zoning board of appeals are either new or are now serving in different positions than what they originally had been.

In addition to reviewing each body’s duties and methods for effective decision-making, Enos discussed components of the township’s zoning ordinance that new members might be unaware of, or how the ordinance could be affected by an entirely new law. One such example was the township’s ability to regulate businesses involving marijuana, should a proposal pass in the November 6th election that would legalize recreational use of the substance. Enos also addressed rezoning, as that was an issue township officials encountered on a large scale earlier this year when a company began considering property to construct a power plant.

Enos and Kehoe’s workshop also reviewed the site plan approval process, with an emphasis on knowing and identifying why an official would approve or deny a request. One of the most important things, Enos told officials, is understanding the responsibilities, adding that residents, businesses and families are counting on them “to make the right decision based on the zoning, based on the master plan, protecting property values and preventing nuisances”.
(DK)