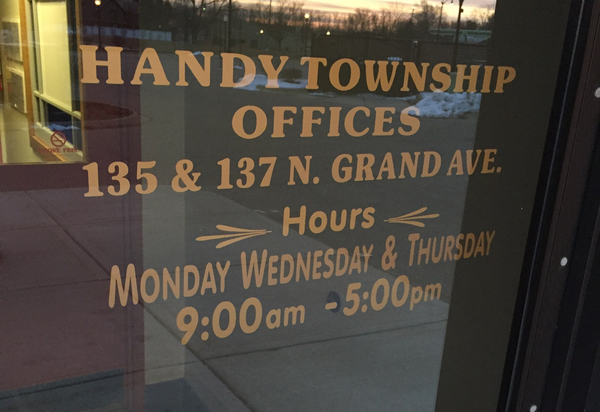 Handy Township is considering its options to boost revenue with a focus on maintaining and fixing local roads.

At a meeting of the township’s Board of Trustees Monday, Supervisor Ed Alverson brought up the issue of a potential request for a Headlee Override of the municipality’s current allocated millage. The Headlee Amendment, which has affected the financial expectations of communities across the state, restricts property tax increases to 5% or the rate of inflation – whichever is less. According to Alverson and other Board members, the township has not requested a Headlee Override as far as they can remember. Alverson says restoring the municipality’s original allocated millage from .00086th’s of a mill to the maximum allowed 1.3 mills would generate an additional $124,420.

Alverson says the other option is a modest increase of the road millage, which voters approved at 1 mill. It has since been rolled back to .9830. He tells WHMI under this option, residents will know that 100% of their taxes in that regard will go back to local road maintenance and repair. He notes that roads are one of the most, if not the most, critical items the community needs funding for. He says things like chloride application to roads, which comes in at about $28,000 per application, is typical about two to three times per year. But, during summers with drier conditions, it is more likely to be applied three times and, now at $72,000 just for that treatment, Alverson says there will be less maintenance on other gravel roads.

Alverson tells WHMI state officials are working on that issue, but that local residents may like an opportunity to take that avenue for funding into their own hands adding, "...if they say, 'no, we don't want to do that', then we'll manage the best we can with what we have."

The Board at their meeting Monday only discussed the issue because Trustee Gordon Munsell was absent. Alverson says he did not want to get into deep conversations without the full Board present, so the potential request for a Headlee Override or a road millage increase will be taken up at a future Board meeting. (DK)