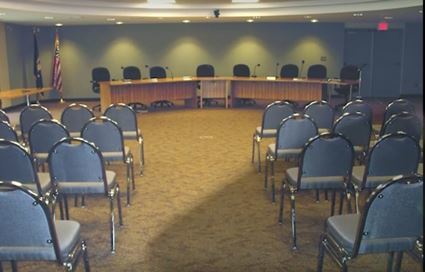 
The Hamburg Township Board plans to make determinations to hold future meetings either in-person or virtually based on anticipated participants.

The board earlier adopted a resolution declaring a State of Emergency or SOE, which was needed to allow virtual meetings to continue for the board and other bodies such as the Planning Commission and committees.

The board met virtually on Tuesday afternoon and Supervisor Pat Hohl said based on technical issues; it’s pretty cumbersome for staff to do any type of blended meeting. He said with recent changes, the board can hold a regular meeting at the township hall off Merrill Road with masks and social distancing.

The board approved a motion to return to in-person meetings in all instances as long as social distancing and all state orders and directives and MIOSHA can be complied with. It was noted that an upcoming public hearing at the Planning Commission will be virtual as 40 to 50 people are expected to participate. Hohl said he didn’t think they should get rid of the option to conduct meetings virtually, noting the Planning Commission meeting has already been published, advertised, and posted. Hohl clarified that his motion was not for any blended meetings but to make determinations on anticipated participants in a meeting - adding if there was something like a public hearing, then that would likely be virtual.

Hohl said their calculations show they can get 30 to 35 people with social distancing. Beyond elected officials, he said that equates to around 25 participants properly separated by a minimum of six feet of space in the board room. Hohl commented that it has been kind of cumbersome to follow all of the different directives but they do all they can to comply.

The motion was approved unanimously. Trustee Cindy Michniewicz commented there’s no reason for rescinding the SOE and the board can either hold virtual meetings when needed or hold in-person meetings when they can. Trustee Patricia Hughes commented she was also in favor so long as the SOE isn’t rescinded.

However, Treasurer Jason Negri told the board he intends to raise the issue at the next board meeting on April 16th. He earlier voted against the motion to declare the SOE saying he felt circumstances didn’t rise to the level of any emergency.