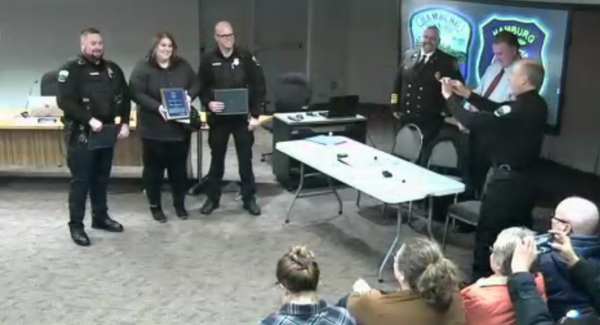 
Various police, fire and public safety personnel were honored during Tuesday night’s meeting of the Hamburg Township Board.

The annual recognition is traditionally done during the last board meeting in December and there was a large crowd in attendance.

Director of Public Safety Richard Duffany stated that the men and women of the police and fire departments do a professional, outstanding job on a daily basis but there are a few occasions throughout the year when their actions should be recognized publicly.

Those reaching milestones in their career were also recognized during the meeting. Fire Chief Nick Miller Chief recently celebrated 30 years with the Department, while Sergeant Tim Begnoche celebrated his 5th anniversary.

Three new firefighters that started out as cadets were presented with their badges and are now fully trained firefighter EMT’s - Tim Mackenzie, Max Miller and Dylan Moore.

The board previously approved an organizational restructuring plan for the Fire Department (HTFD) which included the hiring of an additional full-time Duty Captain. At Tuesday’s meeting, the board voted unanimously to hire Casey Yost for the position. He was said to be the top candidate following a promotional examination process. Yost has been with the department for over 11 years and also spent the last 4 years as a full-time Public Safety Officer with the University of Michigan Division Of Public Safety.

Supervisor Pat Hohl commented that anything they say really doesn’t do justice to the service, dedication and sacrifice the individuals provide to the township on a daily basis. He expressed his deepest appreciation to all firefighters, police and public safety – saying what they provide to the community is priceless and very much appreciated.

Hohl stated this will be the seventh year that Hamburg will be recognized as the safest community in the state with 20,000 residents or more. He noted various full cardiac arrest events in which many lives were saved due to the rapid response, training and AED’s and commented that it’s impossible to put on price on that.

Hohl added the millage that residents approved has been a blessing so that the public safety department can move forward, train and have the needed equipment to continue to provide such service to residents.