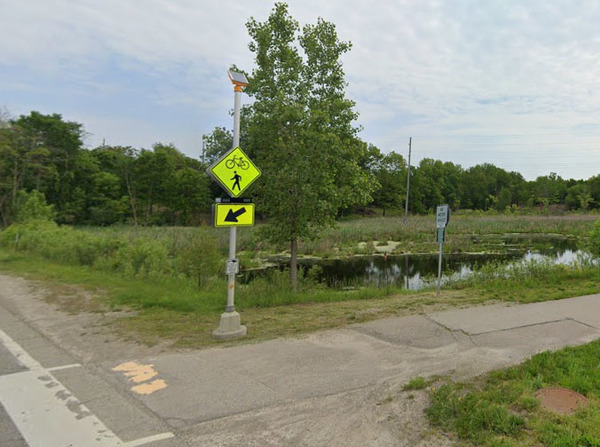 
Some pedestrian cross-walk flashing lights have been removed along the Lakelands Trail in Hamburg Township after it was determined they actually caused larger safety problems.

In January, one of the pedestrian cross-walk lights on the Lakelands Trail at Merrill Road was destroyed in a car crash. Afterward, in consultation with the Hamburg Township Police Department, Supervisor Pat Hohl says a decision was made to not replace the flashing light that was destroyed and to remove the remaining light on the west side of Merrill Road.

A press release from the township states the existence of the lights in a 55mph speed zone has caused frequent near misses between vehicles and pedestrians who assumed that the yellow flashing light mandates that vehicles on Merrill Road must stop. The release states that it is the responsibility of the pedestrian to ensure their safety. Hohl said the yellow flashers have been removed because they have given pedestrians and cyclists a false sense of safety and caused many near accidents between vehicles and pedestrians at the Merrill Road pedestrian crossing.

The Merrill Road Lakeland Rail crossing is one of ten crossings on the Lakelands Trail in Hamburg Township. Yet Hohl says during the time the yellow flashers were in place, it was the only crossing at which reports and observations of pedestrian and vehicle conflicts occurred.