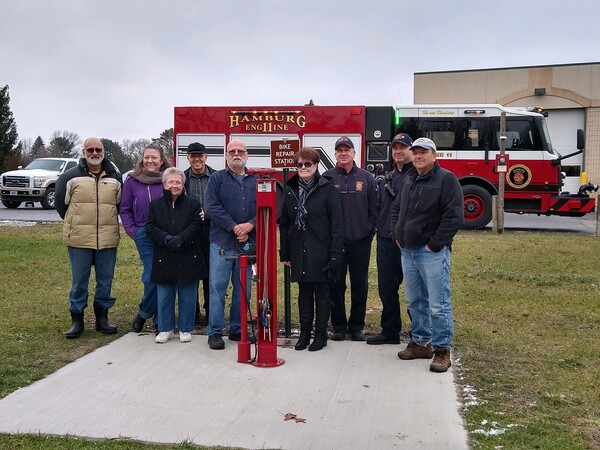 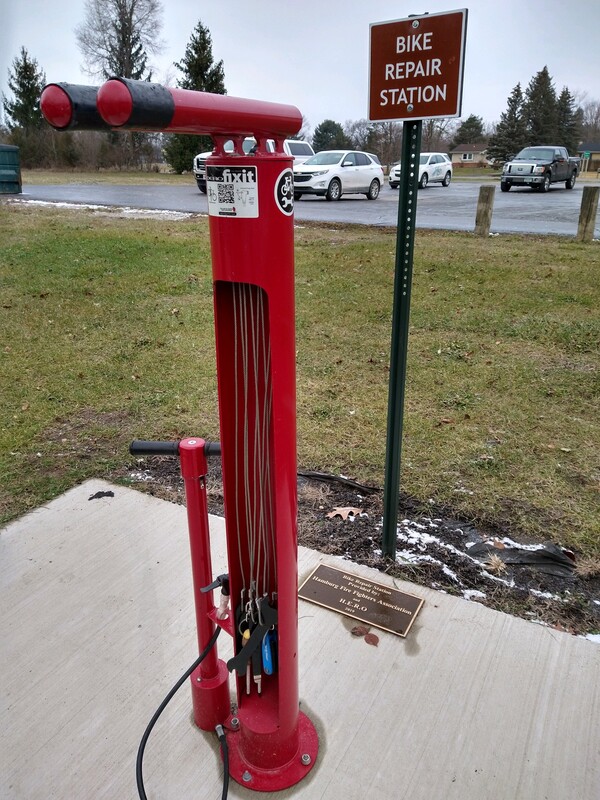 
A new bicycle repair and maintenance station on the Lakelands Trail in Hamburg Township was formally dedicated by a group in good spirits on Wednesday afternoon.

The new station is located directly behind Hamburg Fire Station 11 off M-36.

Supervisor Pat Hohl commented that the trail gets an unbelievable amount of use, even in the winter, and the bike repair station has already gotten a lot of attention. He said people know it’s there and some come out just to work on their bikes as it’s not simply for repairs but also a maintenance station.

It was made possible by the Hamburg Firefighters Association. Director George Miller said he got the idea while visiting Kentucky where stations are spaced out along a riverfront trail. He commented that some initially were reluctant and felt the station wouldn’t get used but still agreed to the purchase. Since then, Miller said hundreds of people have taken advantage of it and it’s good to see that it’s being well-used.

Bikes can be hung on the station from the top or even upside down. Miller said it has all of the necessary tools needed to work on bikes including different size wrenches and screwdrivers, hex keys and wedges for changing tires. All of the tools are attached by a steel cable so they don’t get lost and are there for everybody to use.

Miller thanked the Hamburg Enhanced Recreation organization or HERO for contributing toward the cost as well as other partners. The concrete pad was donated by a local company and firefighters did the installation, while signage was said to be donated by the state park system. Eventually, some landscaping will be done around the station.

Miller commented that the project was something they thought was necessary and firefighters say it really gets used and that’s what it’s all about. He added they wanted to do something to give back to the community and that’s what they did.