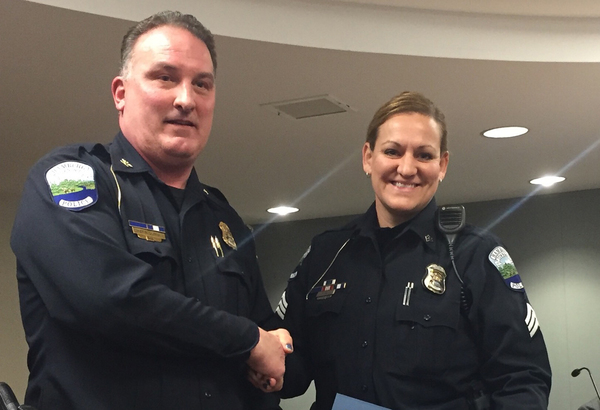 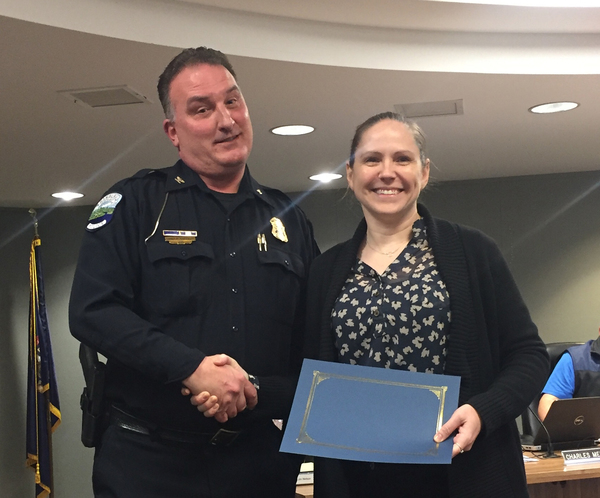 The Hamburg Township Police Department is honoring two of its own officers for their display of perseverance and courage in cases that occurred this past year.

In one of the sexual assault cases, Leeds received information that a teen male was sexually assaulting his younger sisters, prompting Leeds to immediately request that CPS remove the suspect from the family home. Duffany says CPS told Leeds there was not enough evidence to remove the suspect, but Leeds didn’t back down. She then obtained a petition for removal through the Livingston County Prosecutor’s Office and had the suspect removed from the home pending her investigation. Her work led to the suspect being convicted on multiple counts of sexual assault this past July.

Leeds also investigated an alleged sexual assault involving a minor girl and an adult relative. The child, who lived out of state, said the assaults would happen when her family was visiting. Leeds’ investigation and work with out-of-state officers led to the suspect being charged in Livingston County on multiple felony counts of sexual assault. A jury found the suspect guilty on all charges and he was sentenced to four to 15 years in prison.

In the third case, Leeds commenced an investigation after an elderly couple reported unauthorized charges on their credit card. The detective obtained surveillance footage from a store where one of the unauthorized charges occurred and the couple was able to identify the suspect in the video as a woman they had recently befriended. Duffany says further investigation found that the suspect had also stolen the couple’s identity and opened or attempted to open 21 different credit cards in their name, as well as successfully lease a car in the couple’s name. The suspect also used one of the fraudulent cards to pay off court costs related to a similar case in which she was convicted in. Leeds’ investigation resulted in the suspect pleading guilty to multiple felony counts of identity theft and fraud, and a conviction of six to 15 years in prison.

Chief Duffany then presented Sgt. Paul with departmental citations recognizing her efforts in two separate cases that involved suicidal subjects. One case involved an 11-year-old boy who was threatening suicide. Duffany says when Paul and other officers arrived at the home, the boy was in an extremely agitated state, holding a 10-inch knife to his head. Paul began speaking to the boy and convinced him to put the knife down, before attempting to distract him by asking him about a lamp in his room, which he then threw at her. When she went to hand it back to him, she pulled him toward her, grabbed him in a bear hug and carried him out of the bedroom. He was taken to the hospital without further incident.

In the second incident, officers including Sgt. Paul were dispatched to a home on a report of a man threatening suicide. Paul was speaking with the man’s wife when the man entered the living room with a loaded shotgun and sat down in a chair with the butt of the gun between his feet and the barrel pointing towards his head. Duffany says the wife was removed from the home and officers took cover. Paul spoke with the man through an open door for about 20 minutes. During that time, the man attempted to place his toe on the trigger to discharge the weapon on multiple occasions. Paul convinced him to place the gun on the floor, where she was eventually able to grab it. The man was also transported to the hospital without incident. (DK)