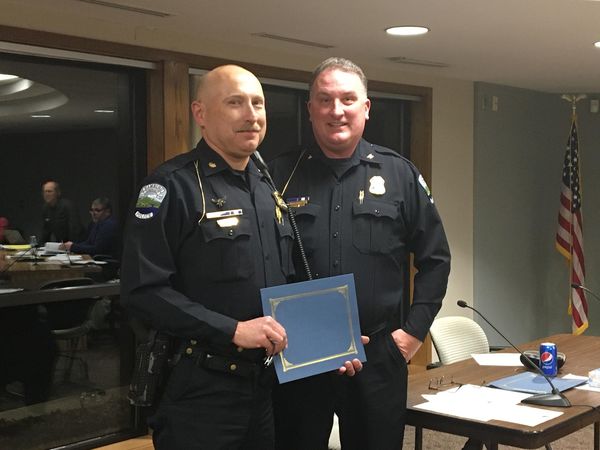 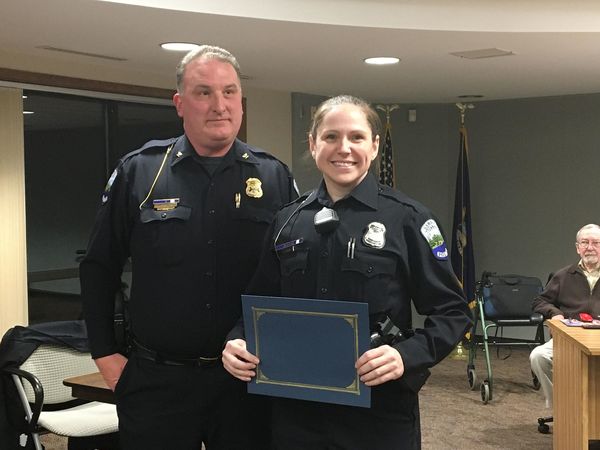 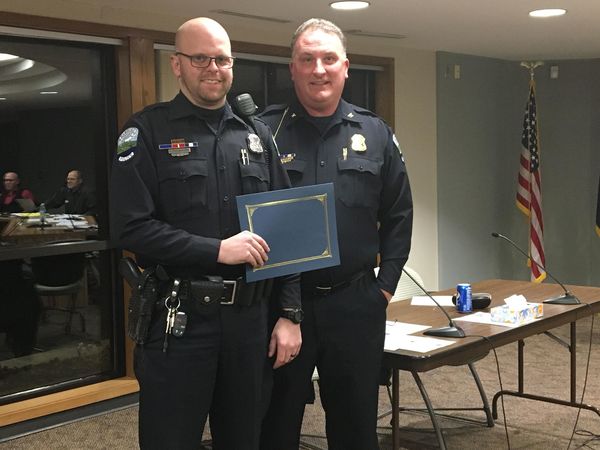 Several members of the Hamburg Township Police Department have been honored for going above and beyond the call of duty. Three officers were recognized for specific instances from the past year at the township’s Board of Trustees meeting Tuesday night.

The first to be honored was Deputy Chief Dariusz Nisenbaum, who was awarded a Certificate of Merit for his actions on May 13th, which led to the arrest and conviction of two subjects for larceny. Nisenbaum was reportedly off-duty that day and shopping at the Home Depot store in the City of Brighton when he noticed a male subject acting nervously and checking to see if he was being watched. The subject did not make a purchase before leaving the store and entering a vehicle parked in the parking lot. A second male then left that vehicle and walked into the store. Believing a crime was about to occur, Police Chief Richard Duffany says Nisenbaum contacted Livingston County Central Dispatch and provided them with a license plate from the suspicious vehicle, in addition to requesting that police respond.

Minutes later, the second male subject exited the store through an unlocked gated area that had been unlocked by the first male. The second male was pushing a shopping cart full of items, unloaded them into the vehicle and tried to take off, but were stopped by Brighton officers. Subsequent investigation revealed that about $650 worth of merchandise had been stolen from the store. Both subjects were arrested and the merchandise was returned.

Officer Kimberly Leeds was awarded Department Citations for her investigation into a complaint regarding an alleged sexual assault on a minor girl by an adult relative. Chief Duffany says the investigation conducted by Leeds was very in-depth and comprehensive, noting that she interviewed and re-interviewed numerous witnesses, and executed several search warrants on multiple phones, computers and the residence.

Leeds' investigation uncovered evidence that the suspect had actually sexually assaulted two minor girls over the course of a ten-year period. The suspect was charged with multiple felony counts this past July and recently pleaded guilty. He is now awaiting sentencing.

The third individual to be recognized was Officer Adam Fischhaber, who received the Lifesaving Award for his actions on September 28th that assisted in saving a 56-year-old woman who was in full cardiac arrest. Upon arrival at the scene, Fischhaber found the woman unconscious and her husband attempting to perform CPR on her. Duffany says Fischhaber found no pulse and then took over, performing CPR by himself for nearly three minutes. Fischhaber continued to perform CPR until EMS took over. The woman was transported to the hospital and survived the incident.

Officers from the Hamburg Police Department have been recognized by the township for their exceptional response to specific incidents with a ceremony at the last board meeting of the year. The tradition has continued for the last nine years. (DK)