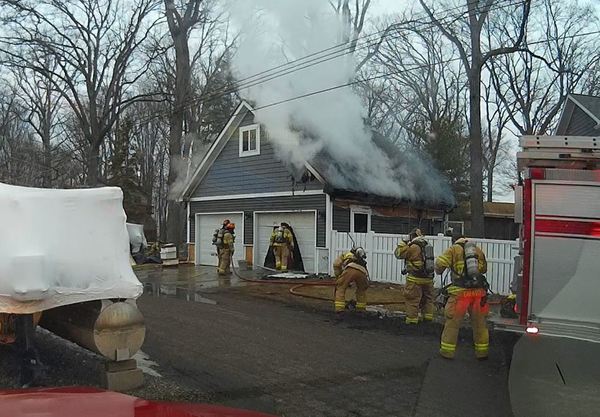 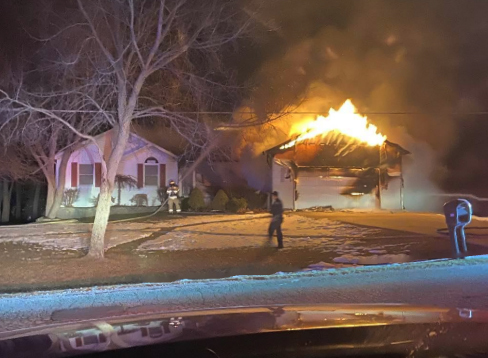 
Hamburg Township firefighters have been kept busy by a series of fires in the last several days.

On Saturday, the department responded to three fires in a three-hour span starting at about 5:20 in the afternoon when they were called to provide mutual aid on a Green Oak Township house fire. Then about two hours later, the department responded for assistance on a chimney fire in Northfield Township. Less than an hour after that, a call came in on a fire in a garage at a home on Crystal Drive in Hamburg (bottom picture). Chief Nick Miller says when they arrived on scene, there were flames already showing through the roof of the garage and spreading into the attic of the attached house. Crews responded quickly and were able to limit the fire’s spread so that most of the contents of the home were saved, although the house itself was uninhabitable with extensive damage in the home’s attic and garage. One firefighter suffered a minor injury battling the blaze and was treated at the scene. They were assisted by the Dexter, Green Oak and Putnam Fire Departments as well as Livingston County EMS, Hamburg Township Police and the DART Team.

Then on Monday afternoon about 4:30, firefighters responded to a call at a home on Kress Road near Zukey Lake where they arrived on scene to find an active fire burning on a two-story detached garage (top two pictures). Chief Miller says they were able to quickly knockdown the flames, but the structure and its contents suffered serious damage. They were assisted at that fire by the Brighton, Dexter, Green Oak and Putnam Fire Departments as well as Livingston County EMS, Hamburg Township Police and the DART Team. Chief Miller says none of the fires appears to be suspicious in nature, but remain under investigation.