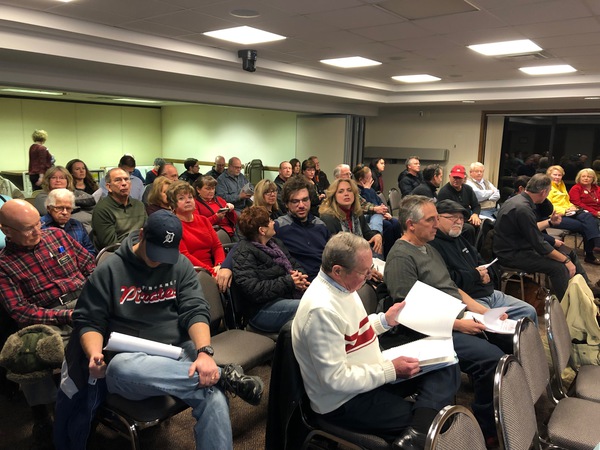 Plans for a proposed subdivision in Hamburg Township are in danger as developers have failed to receive approval from the Planning Commission.

The Waters Edge Village Open Space Community Planned Unit Development has received a recommendation of denial from the Hamburg Township Planning Commission. Developers were before the Commission 2 weeks ago when their preliminary site plan was tabled following large disapproval from the community. In the fortnight since that first hearing, they retooled and prepared for Wednesday night’s special meeting, and were met by the same distrust. The new plan reduced the number of units on the 93-acre parcel off Winans Lake Road from 154 to 144. They proposed improvements to trails, 10 universal ADA units, and a 6% increase in open space. McKenna Group, who does consulting for the township, recommended approval with considerations. Many residents still thought it was against the master plan, the density was too high, and that the traffic the subdivision would cause would be too great.

Without the PUD, the developer would be restricted to only 77 homes in the area. Planning Commissioner Charles Menzies pointed out that without the PUD, the development would look just as “cookie cutter” and the township would lose control of aspects like tree preservation and measures to protect the Huron River waterway. The Open Space PUD allows the township to permit higher densities if there are exemplary reasons to. Commissioner Victor Leabu helped create the ordinance and said that the multiple housing types, trails, and quality of building materials makes it the most exemplary he’s seen. Commissioner Joyce Priebe was also around for the creation of the ordinance and said it was never their intent to allow so dense a development as this. While many were impressed with different aspects of the project, the majority of the Commission agreed with the public that 144 homes was still too high.

The site plan will now go to the Hamburg Township Board of Trustees for consideration, with a recommendation of denial from the Planning Commission. (MK)