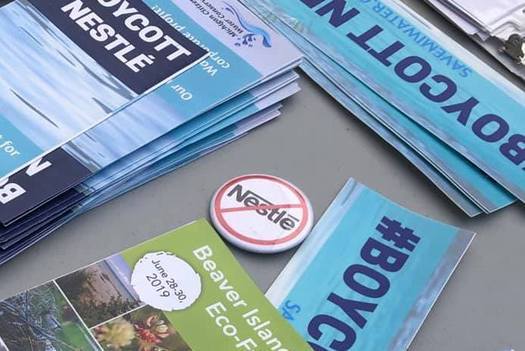 Despite a legal victory against a major corporation, environmental and community groups are not letting their guards down when it comes to protecting Michigan's water.

The Michigan Court of Appeals earlier this month ruled Osceola Township had the right to deny a zoning permit to Nestle for a booster station to increase water extraction. The company had argued local zoning officials were improperly influenced by public opposition. But Peggy Case, president of Michigan Citizens for Water Conservation, said the court ruled that elected officials should be sensitive to residents' concerns, and would be wrong to not take public opinion into account. "It's a beautiful ruling on democracy, on the rights of citizens to actually elect the people that they want and expect them to perform on their behalf."

The court also stated it was "erroneous" of the circuit court to rule Nestle's water-bottling operation is an essential public service. The company wants to increase pumping rates at its Evart well from 150-200 gallons per minute to more than 400 gallons per minute. The permit to increase production still is awaiting a ruling in a Contested Case filed by Michigan Citizens for Water Conservation. Nestle can appeal the case to the Michigan Supreme Court, or try to get the property rezoned. Case observed the company wants the water, and she's anticipating their next move. "They were going to try to run trucks on these rural roads. There's some possibility they might try to run another pipe. So they have other options and, of course, we would attempt to counteract anything they might do to be even more destructive to the environment than they already are."

Meanwhile, Nestlé Waters North America, Inc. is the target of two state bills designed to increase the state’s control over groundwater supplies. The bills, introduced into the Michigan House by Democrats, would make it easier for opponents of water withdrawals to seek legal recourse while also banning water pumped in the state from being shipped outside of the Great Lakes watershed.

Since 2000, Nestle has extracted more than 4 billion gallons of water from Michigan. Case says her group has been struggling to get the attention of local and state leaders. "We just filed a complaint for the failure of the state to help us deal with Nestle's grabbing of public water and forcing a small environmental group to spend buckets of money doing the kind of work that the state should be doing."

Bridge Magazine says state environmental officials received more than 81,000 public comments last year when Nestlé asked to increase pumping capacity in northern Michigan — with only 75 comments supporting the company’s proposal. Despite that, the legislation is sure to face an uphill battle in the GOP-controlled legislature. (JK)