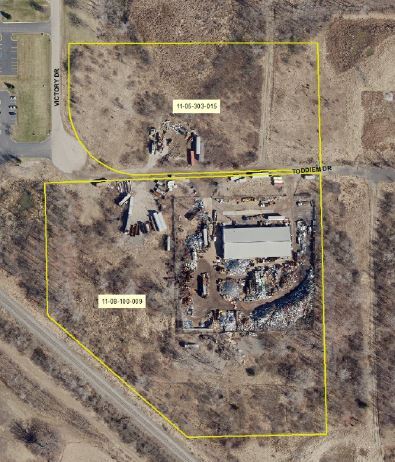 
A group of residents are planning to protest a possible asphalt plant in Genoa Township.

The Board of Trustees earlier conducted the first reading of a proposed rezoning ordinance that involves two properties. A second reading, public hearing and consideration for adoption will take place at the board’s next regularly scheduled meeting this coming Monday.

The rezoning being requested is from Industrial District to a Planned Industrial Development overlay district. The township Planning Commission recommended approval of the rezoning in October. The larger 11-acre parcel is located south of Toddiem Drive and is currently occupied by a scrap metal business. The smaller, vacant 5.2-acre parcel is located east of Victory Drive and north of Toddiem Drive.

A group of residents that previously fought a gravel pit project have now joined up to oppose the proposed asphalt plant. On a Facebook page created by the group, they claim the plant will create health hazards and lower property values.

Supervisor Bill Rogers previously told WHMI the project would actually be an improvement to the site because it’s a piece of property that’s currently a junkyard and metal scrapping facility. He said Lansing-based Capital Asphalt wants to build another plant there, which is an area along the expressway he described as “not very pleasant looking.”

Monday night’s meeting starts at 6:30pm at the township hall off Dorr Road.