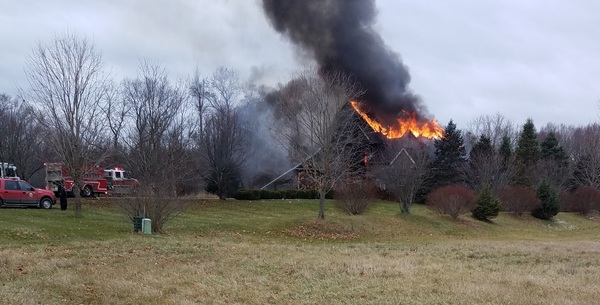 A home in a Gregory subdivision was destroyed by fire Thursday.

The home located on Bridgets Way is believed to be a total loss following the fire that started around 11am. Crews from nearly a dozen fire departments responded and remained on scene as of 4pm doing clean-up. The Disaster Assistance Response Team or DART was also on scene. The home was in a rural area with no access to fire hydrants, so a tanker truck had to pump water from a pond located near the front of the subdivision to help fight the fire.

Unadilla Township Police Chief David Russell was the first to arrive on scene and discovered a dog in the basement. He tells WHMI he was able to smash the glass of the basement doorwall to get the dog out safely. Russell says the homeowners were not home at the time but arrived later and it was learned there was another dog inside. Crews were able to rescue the other dog, which suffered smoke inhalation. That dog was given oxygen by EMS and then transported to a vet. The cause of the fire remains under investigation. (JM)