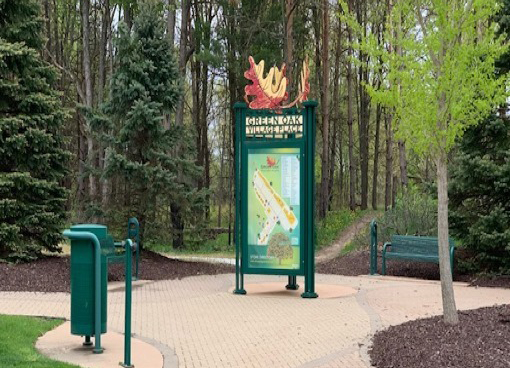 
Some Green Oak Township residents have weighed in on the 2021 – 2025 Parks, Recreation & Trails Master Plan – with a large emphasis on trails.

The plan articulates the vision for parks and recreation in the township and aims to guide recreation planning and development efforts over the next five-year period. The township board met virtually Wednesday night and adopted the plan following a public hearing in which four people spoke, commending the township for its efforts – especially when it comes to continuing trail development and connections. A review and comment period has been underway and a survey was conducted. The plan has been on file at the township, links were included in a survey and it was available on the township website. It was noted that the township initially had two letters related to trails but then received an additional 12 letters of support for continuing trails, which will be included in the comment section.

Supervisor Mark St. Charles said they’ve been able to get the word out and had some pretty interesting comments with respect to input through the survey that were related to enhanced recreation and level of service with recreation opportunities. St. Charles said he thinks it’s a great plan and Green Oak is a pretty cool place to live with good variety. He added the master plan document was good reading and contains a lot of cool stuff and he was very impressed.

Resident Fred Hanert commented during the public hearing that he was very pleased with efforts to increase trail opportunities throughout the township – noting there’s been tremendous usage during pandemic,. Hanert said he and his wife do a lot of biking, walking and hiking and the trail from Hall Road east to US-23 is greatly used – adding it couldn’t come at a better time for people to be outside and he’s glad the township has supported the efforts. Being a representative of Green Oak to the Huron River Watershed Council, Hanert commented further that the river is a trail, part of which runs through the township, and he feels that should be kept in mind when talking about trails as it is also well used.

Others who spoke thanked the township for its continued energy and support, commenting that the plan not only benefits Green Oak but the greater area and there are very real economic and quality of life benefits that residents reap from trail systems and connections. It was stated that many are also looking forward to a future connection from M-36 to the Township Hall to get a portion of the Lake to Lake Trail from Lake Michigan to Lake St. Clair completed.

Longtime resident and trail enthusiast Jim Fackert said he was excited about the new connection from Hall Road to US-23, and although the trail along Maxey is littered with signage, it’s marvelous and gets a lot of use with people out all the time. He thanked the township for its or years of effort to keep the ball rolling. Fackert said there’s now one more chunk to connect the trail at Green Oak Village Place and the Fieldcrest trail across the township – adding he’s excited about that connection and looking forward to getting it finished.

One resident raised questions about future linkage with the portion of the Lakeland Trail that runs from M-36 to 8 Mile and ends. St. Charles said for the Lemen Road Trail, they’ve been working with Northfield Township –which is planning to tie their trail system into where Green Oak left off at 8 Mile, which is the county and township line. He said the plan is to give the township a trail connection to Northfield Township and Washtenaw County and other communities to the south - noting the Park & Ride lot in that area will also tie in to the system.

A copy of the newly adopted Parks, Recreation & Trails Master Plan can be viewed in the board meeting packet. That link is provided.