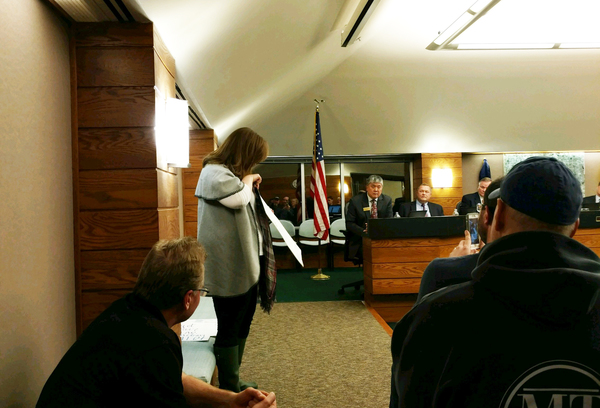 Bridgett McDowell of Green Oak Township said she was just as surprised as anyone else that her performance at Monday’s Livingston County Board of Commissioners meeting was retweeted by actor Patton Oswalt and then reported on by other platforms including the website, The Nerdist.

McDowell and the several other dozen residents were at the meeting to take part in what was called a, “People’s Filibuster.” The concept invited residents to each use their full three minutes of public speaking time to extend the length of the meeting as a way to convince commissioners to again broadcast their meetings on the internet, a practice that had been allowed to expire after a pilot run in 2018.

McDowell used her time at the beginning of the meeting to discuss her hobby of calligraphy, but during her time at the close of the meeting she reenacted, word for word, a monologue by Oswalt in a 2013 episode of the TV sitcom “Parks & Rec” in which his character tries to filibuster a council vote by detailing his idea for a Star Wars movie involving Marvel characters and figures from Greek mythology.

The performance was captured on video by a reporter for MLive, who tagged Oswalt on Twitter, setting up his surprised response the following day. McDowell tells WHMI that the idea was not something she had originally planned for. "I forgot there was a second call for public comment so I realized I didn't have another thing to discuss and I wanted to contribute. So I just Googled the transcript and found it. I really wish I had watched the clip (of Oswalt) in advance because I didn't know how to say a lot of the names of the planets or whatever from Star Wars. But yeah, it was really fun."

McDowell said she’s normally a pretty reserved person, so she’s happy to let her 15 minutes of fame come to an end. However, she is also happy that the filibuster had the intended effect of convincing commissioners to reconsider broadcasting their meetings. That topic will be discussed at Monday’s General Government Committee meeting.

Former County Commissioner Dave Domas, who was one of the commissioners that voted to allow the pilot contract to expire last November, has since taken issue with the notion that it was a vote to permanently end broadcasting the meetings. He says it was instead simply to allow the sunset clause on the contract to take effect, with the intention that the issue would be taken up by the full board. Indeed the minutes to the November 19th Broadcast Committee meeting do state, "Motion allow the phase to sunset, reconvene in March, or earlier if needed." (JK)