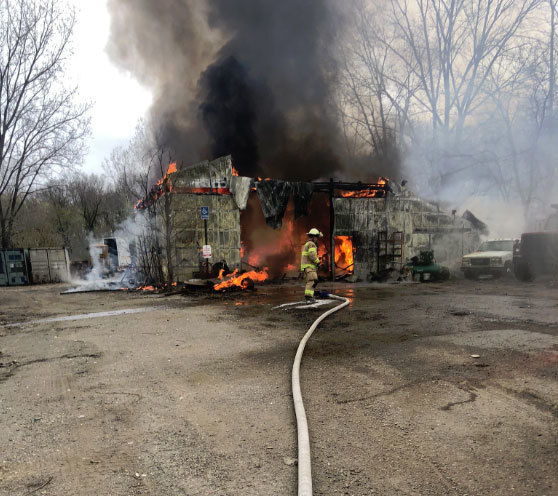 A large number of departments battled a building fire with explosions that resulted in a Hazmat situation Thursday afternoon.

The Green Oak Township fire Department was dispatched shortly after 4pm to Superior Sanitation on Rushton Road, north of Silver Lake Road on a report of a building fire that was exploding. Fire Chief Kevin Gentry tells WHMI crews found a 100 x 100 pole barn full of various hydraulic fluids, oxyacetylene tanks that are used for welding and other chemicals in storage tanks, many of which exploded as they were arriving on scene. Multiple fire departments responded and extinguished the fire. Gentry says The Livingston County Hazmat Team was called because the facility is just uphill from the Huron River so they had to block off the area to absorb all of the water to prevent it from entering the Huron River with various chemicals. Green Oak Township was assisted on scene by the Brighton, South Lyon, Hamburg, Northfield and Lyon Township Fire Departments. Also assisting was the Livingston County DART Team. Gentry says the large number of fire departments and tanker trucks had to be called in because it required a large amount of water in an area where there were no fire hydrants. The Hazmat Team had to place absorbent pads and boons to prevent the water run-off from going into the river. Gentry noted that from the time of the initial call to the time the first units arrived on scene, there were many different explosions with various welding tanks and other tanks blowing up.

Gentry says initial investigation suggests that there was likely a malfunction during a welding event that appears to have started the fire. There were no injuries reported and the building was un-occupied when the fire started. However, Gentry says the workers had been using a cutting torch just shortly before the fire began. Rushton Road north of Silver Lake Road was shut down to allow tankers to turn around and deliver water. After the fire was extinguished, Gentry says crews remained on scene cooling various hydraulic tanks that did not blow up but were in temperatures in the range of 400 to 500 degrees when they arrived. (JM)