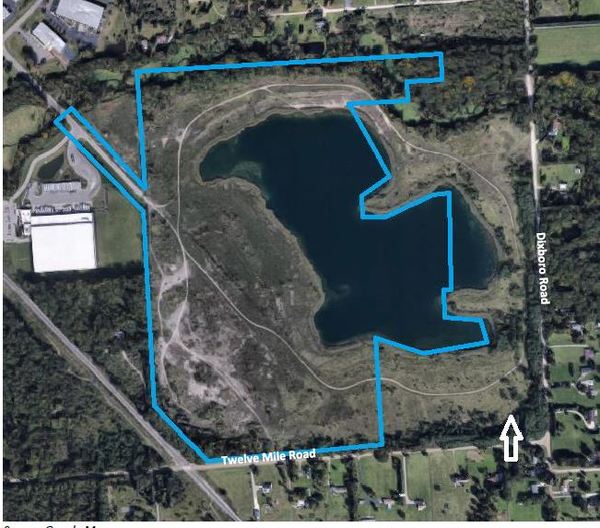 
A new housing project is being proposed around a lake in Green Oak Township.

The Planning Commission met virtually Thursday night to review various aspects of the proposed project, Dove Lake Estates. The applicant, Thomas Schroder and Dove Lake LLC, is proposing a single family residential development on the north side of Twelve Mile Road, about a quarter mile west of Dixboro Road. The lake would be private access. The proposed development would feature 37 new, single family units on 108 acres, including roughly 35 acres of open water. It’s a cluster development and all lots would have lake frontage. Access to the lots would be provided by two new proposed roads.

The property is currently zoned Rural Estates and the applicant is seeking approval for a planned unit development or PUD. Thursday night was considered just a general introduction for discussion. Township zoning ordinance allows for regulatory flexibility in PUDs and the applicant was seeking modification to the lot size and setbacks, which a decent amount of discussion centered on. The proposed lots range in size from just over a quarter-acre to just over a half-acre. The minimum for waterfront setbacks is 50-feet and the applicant was seeking a 45-foot setback, but agreed they could easily move to the 50-foot lakefront setback.

Planner Paul Montagno said among the key criteria for a PUD is recognizable benefit. Among the benefits to the community were listed as the preservation of open space on the site, protection of natural features and the preservation of the existing character of the land. It was stated that by clustering the lots away from the road and preserving the vegetation along the perimeter will maintain the existing rural character of the site.

Montagno noted that preserved open space to the north of the lake and most of the southwest corner of the site will encompass roughly 50 acres. That must be guaranteed through a master deed and as part of a PUD agreement.

Comments from the Commission and planners will incorporated into updated plans that will be resubmitted for review. A future public hearing will be held and the Commission would make a recommendation to the township board. The project would ultimately be back before the Commission for final PUD approval.

More information is included in the Commission meeting packet. That link is provided.