Governor Says Michigan Not Yet "Out Of The Woods" 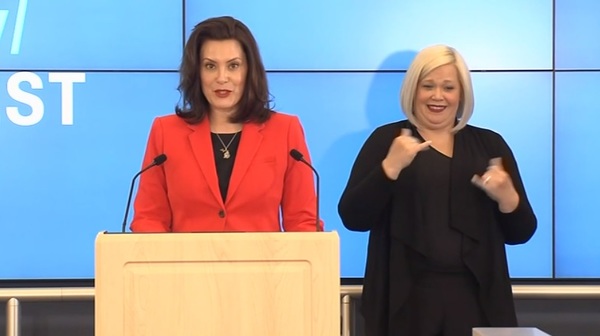 
Another update was delivered Monday on the status of coronavirus cases in Michigan, increased crowds at state parks and clarification that doctors have discretion on nonessential medical procedures.

During a press conference, Governor Gretchen Whtimer again stressed the state is not "out of the woods yet", saying there has been a rapid increase in cases in the western part of the state and up north, and they need to avoid the risk of a second wave. The Governor affirmed that this is a public health issue and she is not negotiating politically but welcomes partnership from every branch of government. Whitmer said the enemy is the virus and the partisan conversation that has been inflamed is not very constructive right now – adding she has adjusted some orders following input from the legislature. The Governor announced the creation of the Michigan COVID-19 Office of Accountability, which will have oversight of all spending to address the crisis and report regularly to her.

Chief Medical Executive Dr. Joneigh Khaldun said the state is on the right track with containing the virus but the only way to know for sure is increased testing. She stated the healthcare system is not ready yet to go back to how things were before COVID-19, but hospitals and physicians have “broad discretion” to decide whether to delay nonessential procedures during the pandemic. An order remains in effect but is intended to be flexible and preserve clinician judgment. Khaldun said physicians have discretion to determine medical case choices, needs and how to safely seek medical care. She added the most important thing is that the order maintains the integrity of the physician and patient relationship so they can do what they need to keep people safe. The Governor stated that she has repeatedly requested swabs and reagents the federal government and some will be coming this week, which is a critical component.

Meanwhile there has been concern expressed about large crowds in state parks and a lack of social distancing. The Governor commented that state parks have been open but recent warm weather is contributing to more people interested in getting out. Belle Isle in Detroit had to be closed twice Sunday due to too many cars being on the island. At Grand Haven State Park, parking lots were closed due to large crowds. Whitmer stated that they are looking at state parks and that she would have more to say on Wednesday.

Meanwhile, as promised, Whitmer on Monday vetoed the GOP-controlled Legislature's plan for more aggressively reopening the state's economy. The bill passed through the legislature last week after Republican lawmakers declined to extend the governor's state of emergency declaration The bill’s sponsor, State Sen. Tom Barrett, R-Charlotte, called the veto "extremely disappointing." The bill would have allowed many of Whitmer's emergency executive orders to continue without the emergency declaration in place, although it would have ended the stay-at-home order, which has closed many businesses and generally required people to stay inside their residences. In the place of that order, the bill would have set safety guidelines for businesses and places of "public accommodation" to follow through May 30. Whitmer, who extended the state of emergency through May 28th, says she doesn’t legally need the Legislature's approval to keep an emergency declaration in place and continue issuing executive orders to combat COVID-19.