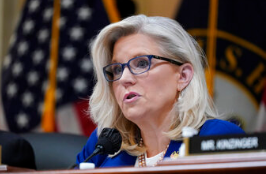 Backing a Democrat is a first for Cheney, a harsh critic of Republican former President Donald Trump who lost her GOP primary in Wyoming last summer. Cheney announced her support for the two-term House member from Holly, in a Thursday statement by the Slotkin campaign.

The two Congresswomen serve together on the House Armed Services Committee and both have backgrounds in national security, with Cheney having previously served in the State Department. Cheney is the former Chair of the House Republican Conference and currently serves as Vice Chair of the House Select Committee on the January 6th Attack on the U.S. Capitol.

Cheney plans to headline a campaign event with Slotkin in the Lansing-area district next week. She called Slotkin “a good and honorable public servant”. Cheney said “While Elissa and I have our policy disagreements, at a time when our nation is facing threats at home and abroad, we need serious, responsible, substantive members like Elissa in Congress”.

Slotkin commented: “At a moment when the very heart of our democracy is being challenged, Rep. Cheney’s voice has been critical,” said Slotkin. “I’m grateful for her support in this race and I’m proud of the work we’ve done together to strengthen our national security and America’s role in the world. We all know that our country is going through a difficult moment right now. But throughout our history, two things have helped us weather times like these: engaged citizens and principled leaders, from both sides of the aisle”.

Barrett’s campaign has released the following statement in response to the endorsement:
“My entire adult life has been committed to service in the Army, and sadly I’ve lost too many friends in America’s endless wars. Now, establishment warhawks like Liz Cheney and Elissa Slotkin are standing together because I oppose their senseless thirst for more foreign entanglements. Rep. Slotkin has already said she would commit US soldiers to combat with China so it's no surprise the Cheney family would join her. Slotkin can keep Cheney while I work to keep America out of war”.