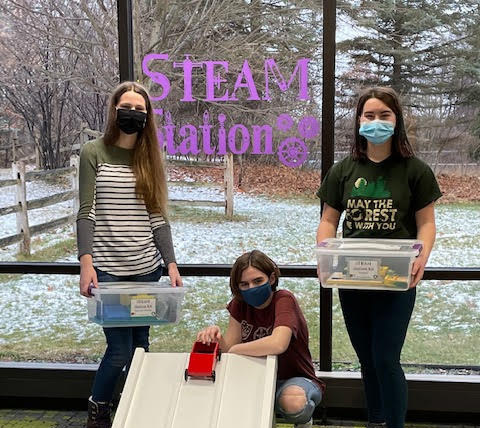 A little over a year ago, three Brighton area students approached the Library about collaborating on a project that would benefit the Youth Services Department. Josephine Morley, Chelsea Weber, and Ashlyn Wood were scouts from troop 40545 and were looking for a project to work on to secure their Silver Award, the highest recognition received as a Girl Scout Cadette. Officials say they also wanted to do something to give back to their community and it was decided that they would add content to the Youth Department's newly established STEAM Center.

Under the direction of Department Head Carla Sharp and Youth Librarian Stephanie Williams, the scouts spent eleven months and fifty hours each prototyping and building two new STEAM kits. Now completed, one kit is based on art which allows kids to get imaginative by creating their own comic book. The other is a car kit where kids can explore the concepts of weight, movement, and speed.

Sharp said they were eager to help the girls in their endeavor, noting the addition of materials toward their newly created STEAM Center was beneficial for the department. She commented that working with local youth who are patrons of the library was a win for both the library and the girls who were pursuing their goals.

The scouts said they decided to choose a project involving STEAM because all three have been impacted by the program in positive ways. They all like to visit the library frequently, so it was said to be a natural choice to work with them and give back.

The unique kits will be housed in the children's STEAM Center and will be available for active use and enjoyment once the Library is open for hands on programming.