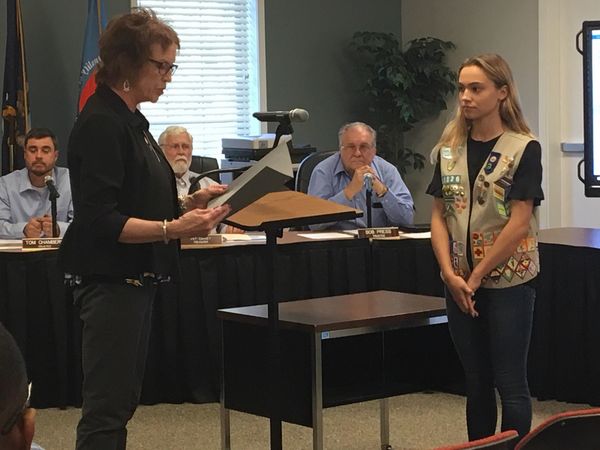 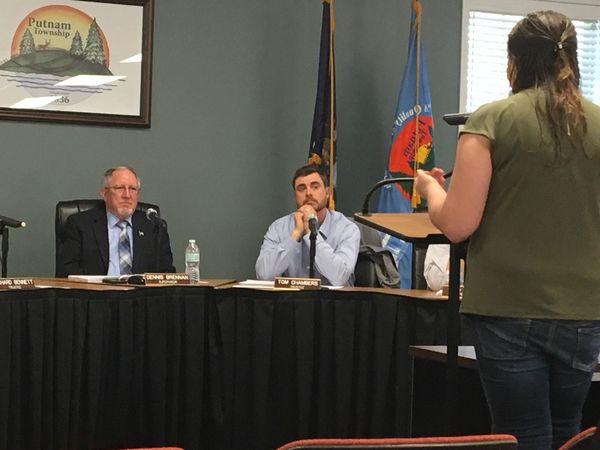 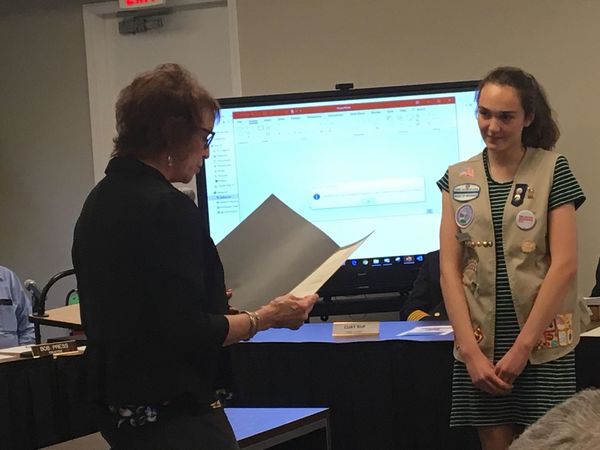 Several local Girl Scouts that are recipients of the program’s Gold Award were recognized for their contributions to the community.

Putnam Township officials honored four Girl Scouts at a board of trustees’ meeting Wednesday. Those recognized include 18-year-old Alayna Morricz from Pinckney High School and Troop 41826, 18-year-old Josie Griffith, who is from Troop 41609 and currently attends Michigan State University, 17-year-old Alexis Howard from Pinckney High School and Troop 40275, and Angela Wagner. All four are recipients of the Girl Scouts of America’s Gold Award, which is said to be the program’s most prestigious award to receive. It allows women to tackle the issues that are most important to them by taking seven steps to develop a lasting solution to the problem they have taken on. Each of the award’s honorees that attended Wednesday’s meeting was presented with a proclamation from the township and briefly discussed their chosen platform.

Alayna Morricz Each of the award’s honorees that attended Wednesday’s meeting was presented with a proclamation from the township and briefly discussed their chosen platform. Alayna Morricz surveyed teachers at Pinckney’s Farley Hills Elementary School and found that they felt the students needed more room to play outside. Morricz decided to renovate the playground sandbox and says, "“You could tell the kids really liked playing in it so there was rarely any sand left…I searched several different sandboxes. I kind of combined some so I created a sandbox that has a roof over it so there’s shade…and then also two raised sand tables so the kids have the option to stand and play instead of sitting in the dirt.”

Josie Griffith discussed her efforts raising awareness and cleaning up local storm drains to prevent pollution from entering the Huron River Watershed. Griffith says she placed stickers on the drains to alert people to the hazards of dumping garbage and other materials into them. Griffith told the board, “Over the course of the summer I put up these labels. They’re very eye-catching…I also cleaned out about 220 lbs. of silt, branches, garbage, anything you can think of. And in the residential areas I put up some door hangers to help further educate people about how harmful it is to dump things down the storm drain. I also created tri-folds and dropped them off here.”

Alexis Howard then talked about how she feels there is a lack of political accuracy in youth and wants to encourage students to get involved in government. Howard says, “I made two sets of curriculum for eight-graders and I taught AP government students to teach them…it was a full-day event and each eight-grader went to two different sessions and basically they got to learn about representative democracy and their place in it and how that meant that they had to participate and they got to reflect upon their passions and make action plans to actually do something about them. Basically we were just encouraging people to use their voices.”

Angela Wagner was unable to attend the board’s meeting but officials noted that she has developed an ongoing series of concerts for residents at the Wellbridge Skilled Nursing and Rehabilitation center in Pinckney. Township Supervisor Dennis Brennan says the girls are the community’s future leaders. (DK)