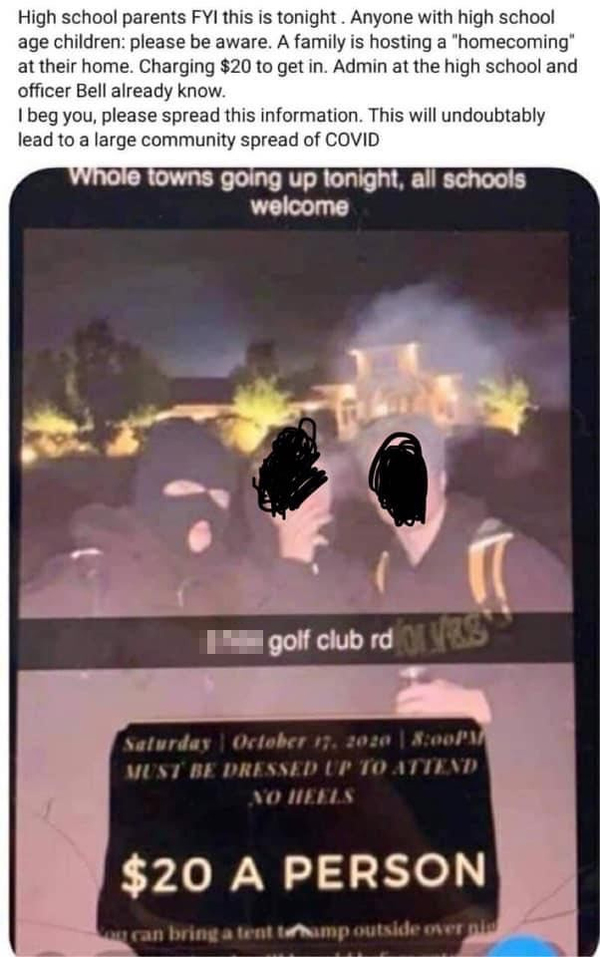 
A gathering billed as a replacement Homecoming Party for Brighton-area students was held last weekend with reports that school officials asked kids not to attend based on concerns of spreading COVID-19.

A picture of an invitation for the gathering is making its way across social media and shows the party was held last Saturday at a home in the 5700 block of Golf Club Road in Genoa Township. The invitation says across the top; “whole towns going up tonight, all schools welcome” and indicate that the cost to enter the party is $20 and that attendees must be dressed up to enter. It also says attendees can bring a tent to camp out overnight. Reportedly the party drew several hundred students and was held outdoors in a tent, although it is uncertain whether the tent was open or closed.

Either way, it would have violated the current crowd restrictions issued by the Michigan Department of Health and Human Services, which state which cap outdoor residential gatherings at 100 persons with face coverings “strongly recommended.” No mention of masks was made on the invitation, a screenshot of which indicates that Brighton High School administration was made aware of the gathering by other parents opposed to the party as well as “Officer Bell”, likely referring to Brighton Police Officer Kristi Bell, who serves as the liaison officer at Brighton High School.

When asked about the party, Brighton High School Principal Gavin Johnson said he would have no comment. Officer Bell referred our inquiry to Brighton Deputy Police Chief Craig Flood, who told WHMI that they “had information that a party was supposed to take place” but because it was reported to be outside the City of Brighton, he had no further information as it was not their jurisdiction. Brighton Police Chief Rob Bradford has since clarified that Officer Bell did inform agencies that cover Genoa Township about the party.

WHMI reached out to the Livingston County Sheriff’s Office, which does have jurisdiction. Sheriff Mike Murphy said they did respond to the location just before 10pm Saturday as a result of a dispatch for a loud party. "Deputies spoke with the parents, advised on gather size, no alcohol for under 21, keep the music down etc." He says while the deputy was there, they observed between 50-75 kids and adults with no tents and no drinking. As "all was good" they departed and never received another call to return.

The party also drew several complaints to the Livingston County Health Department. Public Information Officer Natasha Radke told WHMI that they continue to discourage attending such gatherings. "With the increase in cases and positivity rate we are seeing in Livingston County and across the state, LCHD recommends avoiding large gatherings and events. Widespread community transmission is occurring and LCHD continues to strongly urge residents to adhere to proven public health prevention practices (wear a mask, social distance, wash your hands, etc.) If a resident attended a gathering with anyone from outside their household, it’s important they monitor for symptoms and if symptoms do develop, consult with their healthcare provider and seek testing."

The latest statistics indicate that the age group 0-19 is the second largest in Livingston County for COVID cases, with 331 out of the county's total caseload of 1,869. In addition, the rate of coronavirus infections has increased by more than 20% since October 1st.