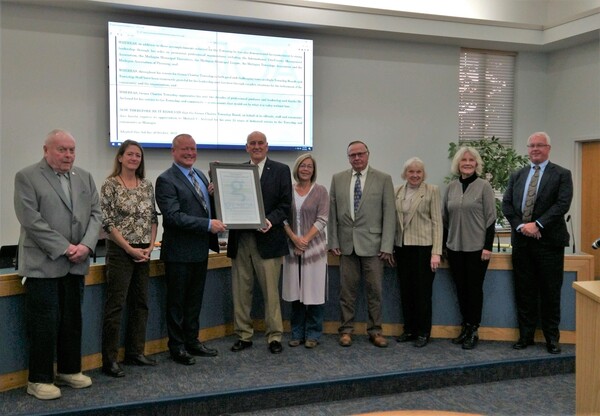 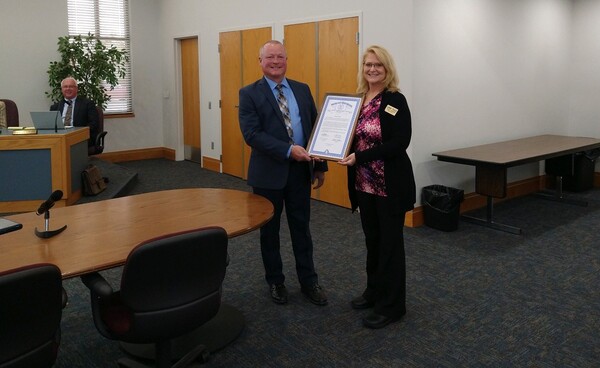 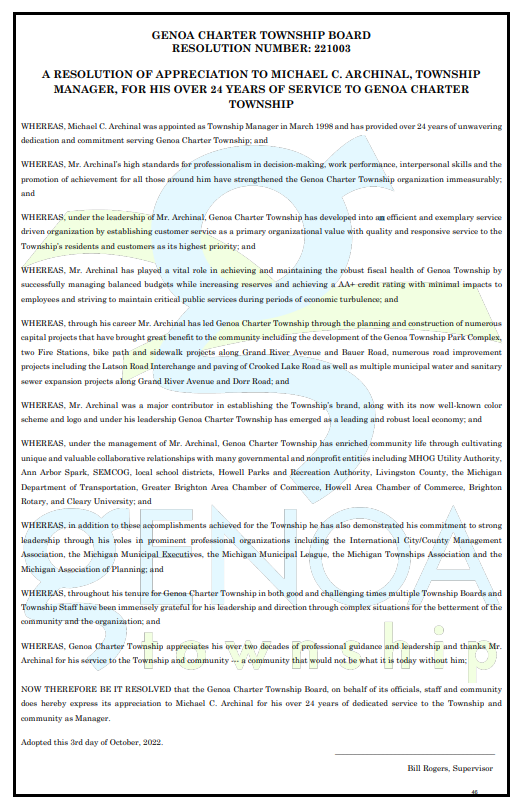 The board recognized Archinal with a resolution of appreciation for his more than 24 years of service, unwavering dedication and commitment to the township. He started out in March of 1998.

Board members congratulated Archinal on his retirement, saying he deserves it and has earned it but he will definitely be missed and has done an outstanding job.

Archinal commented that averaging around three meetings a month - such as the board, planning commission, and homeowner’s associations - he’s attended 1,080 meetings in 30 years and that is a lot. He said he’s worked with some on the board and in the township for his entire career and appreciates everyone very much.

Archinal said what he appreciates first and foremost is that they have let him do his job – which has allowed them to accomplish some really remarkable things – adding it’s not just him but the people they have moving forward. He said the succession plan “couldn’t be painted any better”, they have great staff and “Genoa has a bright future moving forward”.

Assistant Township Manager/Community Development Director Kelly VanMarter is taking over as manager, who brings extensive experience and knowledge to the role. She started out with the township in 1999.

State Senator Lana Theis attended the meeting and also presented a tribute to Archinal; which was signed by her, local State Representative Ann Bollin, Lt. Governor Garlin Gilchrist and Governor Gretchen Whitmer. Theis said she’s always considered Archinal to be a mentor and noted his extensive experience, further thanking him for his service and dedication to the community.

The township resolution states “Archinal’s high standards for professionalism in decision-making, work performance, interpersonal skills and the promotion of achievement for all those around him have strengthened the Genoa Charter Township organization immeasurably”. It goes on to say Archinal has played a vital role in achieving and maintaining the robust fiscal health of the township by successfully managing balanced budgets while increasing reserves and achieving a AA+ credit rating with minimal impacts to employees and striving to maintain critical public services during periods of economic turbulence.

Throughout his career, Archinal has led the township through the planning and construction of numerous capital projects that are said to have brought great benefit to the community including the development of the Genoa Township Park Complex, two Fire Stations, bike path and sidewalk projects along Grand River Avenue and Bauer Road, numerous road improvement projects including the Latson Road Interchange and paving of Crooked Lake Road as well as multiple municipal water and sanitary sewer expansion projects along Grand River and Dorr Road.

The resolution further notes Archinal was a major contributor in establishing the Township’s brand, along with its now well-known color scheme and logo, and under his leadership, the township has emerged as a leading and robust local economy.

Throughout his tenure in both good and challenging times, the resolution says multiple township boards and staff have been immensely grateful for his leadership and direction through complex situations for the betterment of the community and the organization. It concludes by stating the township appreciates Archinal’s over two decades of professional guidance and leadership and the “community that would not be what it is today without him”.