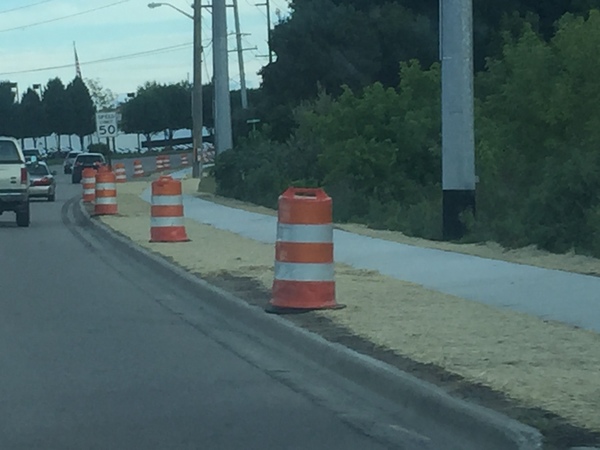 Resolutions are now in order for Genoa Township to submit a grant application for a sidewalk project.

Genoa Township is hoping to secure grant funds through M-DOT’s Transportation Alternative Program or TAP, which is administered through the Southeast Michigan Council of Governments or SEMCOG. The township typically completes a sidewalk phase on a bi-annual basis. The grant funds would aid in completing the final phase of sidewalk needed to form a continuous path on Grand River, from roughly Lynch Carpet to Hughes Road. Since the township has shown a commitment to non-motorized paths and the next phase represents a connection point between communities, there is a good possibility the township would be successful if it applies.

Supervisor Bill Rogers says in the past, the township never really qualified for grants because of all the different specifications or restrictions. He says there are a lot of challenges in different parts of the township with lakes or how wide a path a can be due to other issues. The project is now entering the final segment, which also happens to be the most expensive because of certain ground conditions and hills. Rogers tells WHMI the grant, which would require a 40% match, could help the township move along the final phase much faster so they’re proceeding with the application process. He says the grant opportunity is a nice compliment to Trustee Terry Croft, who sits on SEMCOG’s executive committee, who has been looking out for opportunities and saw something that could work. Croft and Manager Mike Archinal met with SEMCOG and were encouraged to proceed with a grant application. Rogers says it looks like they will qualify and they were going to complete the project anyway but the grant funding would allow it to happen quicker.

There is a February 20th deadline for grant submittal. The board previously approved a proposal for survey and design engineering services. Since the Livingston County Road Commission is the agency responsible for transportation in Genoa Township, a resolution was also needed from that body. LCRC Managing Director Mike Craine tells WHMI Genoa’s application for TAP funding was supported by the LCRC board Thursday and they agreed to undertake the construction on their behalf, if they receive funding. (JM)