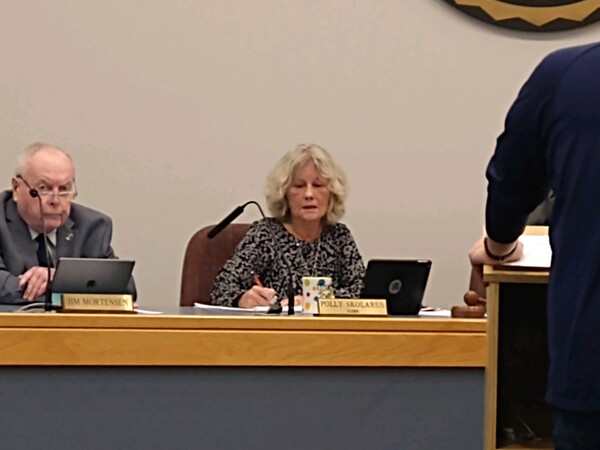 
The Genoa Township board met Monday night and raised concerns with changes to various meeting agendas and corrections to minutes made by Clerk Polly Skolarus.

Treasurer Robin Hunt was out of town and absent from the meeting but sent a letter to the board regarding a memo from Skolarus concerning the amount of detail included in the October 4th minutes. She noted too much information was included regarding a presentation about the Big Red Barrel program and very little to no information was provided on another topic. Hunt asserted that minutes need to be consistent and “should reflect what happened at the meeting, not what the Clerk feels is important”.

Her letter stated other changes to the meeting minutes and agendas were not legal and she further asserted that Skolarus emailed the board members the minutes, which she said was a clear violation of the Open Meetings Act. Hunt added that as a board member, it’s her responsibility to make sure minutes being posted on the board’s behalf are an accurate representation of what happens at meetings and her corrections were just that.

It was stated that minutes don’t have to be verbatim but should reflect various discussions.

The memo from Skolarus defended lengthy minutes recorded on a presentation on the Big Red Barrel program, unauthorized agenda changes, and others related to a closed session and the combining of two agenda items. Skolarus said she had spoken with Manager Mike Archinal about amending the agenda and reviewed the revised edition with him, and that he stated it was a "lie" at the board table on October 18th – writing that she “did not feel his response was appropriate or professional”.

Archinal clarified that he never used the word “lie” and his actual words were “that is not true” and alleged Skolarus changed the agenda on her own by adding items and changing others and he was never given the opportunity to review the revised agenda. Archinal commented the board then approved the October 18th minutes with no inclusion of the conversation with Skolarus that occurred, her memo referencing it, or his response to the board.

Archinal addressed Skolarus directly saying “When you throw me under the bus like that I’m going to call you out on it every time. I am nothing if not professional and honest and you questioned both…you can’t treat people like that.” Archinal added that all he did was point out that Skolarus distributed agendas without his knowledge for the last meeting after they had been approved and only the board can do that.

Archinal disagreed with what Skolarus wrote in the memo and the content of the October 18th minutes but noted the board already took action Monday night without any comments or corrections and they can’t be revisited once approved. He further reminded members that “it is your job as a board to make sure those minutes are accurate and include everything that occurs, not what you want or don’t want”.

Archinal stated “minutes reflect what happens whether they like it or not – your job is to make sure there’s an accurate representation of what is said in this room and that is not occurring. We can all play happy about how they’re going to correct things and do a better job of correcting minutes but you can’t edit and alter minutes to serve a purpose and that’s exactly what happened at the last meeting and you folks just approved it."
Archinal also stated Skolarus improperly combined two items for closed sessions.

Trustee Jean Ledford commented that from July to present, the minutes from each meeting had to be amended in some fashion and that’s only as far back as she went because she felt it was sufficient.

Skolarus acknowledged in the meeting that the minutes are her responsibility and she puts them together the best she can and makes every effort to ensure every name is spelled correctly and reflects what was said at board meetings. She stated in her 36 years as a clerk, corrections do not happen very often and she has no objections to doing anything the board tells her, but they have to tell her what they want. Skolarus noted that she posts draft minutes on the township website within 24 hours of a meeting and members can always approach her with any issues.

The board agreed to have Skolarus start recording meetings for reference if needed, which by law must be kept until the minutes are approved by the board at the following meeting. There will also be note cards for those who speak during the Call to the Public to include their correct information.

Any future corrections with minutes will need to be red-lined for clarity with the original language included so the changes are clear.

A copy of Hunt's letter is attached. Minutes and the memo from Skolarus are included in the attached board packet.