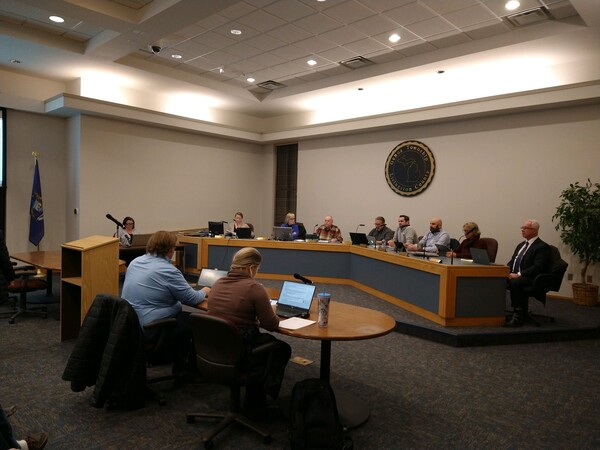 
A request to hear revised plans to construct a prayer campus in Genoa Township was turned down by the Planning Commission Monday night.

Roughly half of the four-hour meeting was dedicated to a renewed request from Catholic Healthcare International or CHI International. It was back seeking a review of a special use application, environmental impact assessment, and site plan for a proposed place of worship described as a prayer campus on 40-acres at 3280 Chilson Road, on the west side of Chilson Road, south of Crooked Lake Road.

A large group of residents attended to again oppose the project, with one person speaking in support of it.

The Commission voted unanimously to not hear the request based on the township zoning ordinance as there was no substantial new evidence to support a change in the intent of the application, nor proof of changed conditions from the reasons noted in the township board denial on May 3rd. Commissioners stated they didn’t feel the removal of a chapel was enough of a change to support rehearing the request and the township board’s prior points for denial stood.

The zoning ordinance states that any special land use application that has been previously denied cannot be resubmitted for one year - except on the grounds of new evidence or proof of changed conditions related to the reasons noted for the denial by the township board.

Vice-Chair Eric Rauch made the motion, saying he struggled to support the idea that the change was substantial enough to support that it was a different request. Rauch said he didn’t feel comfortable supporting moving forward to hear the project based on the criteria and per his conclusions, three out of four were not changed conditions relating to all of the reasons noted for denial by the township board.

The proposal was for various outdoor uses including Stations of the Cross, a mural wall with an altar, prayer trails, religious landscape and garden statues, related driveways, and a 39-space parking lot. The plans included the removal of a controversial chapel building, which was said to be basically the only change.

The various displays mentioned were earlier ordered removed from the site as they were put up without proper township approvals.

CHI was still proposing two large annual events but said there would be much less traffic because the primary draw doesn’t exist anymore with the chapel gone. The applicants argued it’s a low-impact project that would generate less traffic, provide safer exit and entry, and the new lot would avoid any parking on Chilson Road. A past event drew hundreds of people and it was stated that shuttle buses would be utilized for the two large annual events in the future, which could draw between 200-400 people.

CHI President Jere Palazzolo stated he was personally very confused about the whole process. He said they initially talked with township staff but then were later informed they would need to remove things and go through a special use process because it was deemed to be a church, temple, or similar place of worship. He said they’ve invested as much as $40,000 to $50,000 and tried to accommodate everything requested.

Chairman Chris Grajek asserted the process was well explained and staff is always available so he was having difficulty with the disconnect and the applicants not understanding what they needed to do. He said he had big concerns with everything done without approvals and it seemed like they were back on that track again - commenting having a park and trails were far different than what was being described. Grajek added that it took the township filing a lawsuit to get the different items removed - including a mural/grotto he said was hastily put up and raised concerns about the safety and welfare of people.

Staff and planners noted that the new use was quite similar in intensity to the previously demined project - even with the removal of the chapel. It was also stated that it was not clear as to what was really being proposed. The township attorney said they seemed to be hearing a different use than what was included in CHI’s second submission based on a court hearing with people walking on trails in a park setting and holding two special events.

Meanwhile, CHI is currently involved in federal litigation with the township over previous denials related to the project and is still seeking a ruling to construct the chapel.

More information is included in the meeting packet. That link is provided.