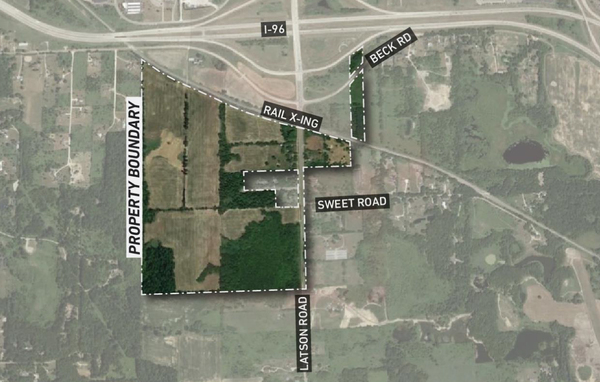 A proposed 193-acre innovation and technology campus planned unit development(PUD) was poured over by developers and a joint session of the Genoa Township Board of Trustees and Planning Commission.

The request by Versa Development is to develop 177 acres on the west side of Latson Road south of the I-96 interchange, with the remainder on the east. The west portion would be developed into a campus-like site allowing for uses like research and development, medical, office, distribution, and light industrial. Not permitted would be uses like heavy manufacturing, junk and salvage yards, truck stops, and vehicle repair.

The smaller east side would be commercially developed to support businesses in the technology and innovation park.

Following a presentation by the developer and comments from the Genoa Township planning consultant and engineer, Board and Planning Commission members had a chance to ask questions and voice concerns. Township ordinance requires businesses in that zoning district to get a special land use permit if their building is over 40,000 square feet. In their PUD proposal, Versa requested changing the minimum size to 200,000. This raised concerns from Treasurer Robin Hunt and Planning Commissioner Jeff Dhaenens. Developer Todd Wyett said 40,000 was too small of a square footage and would drive businesses away that might otherwise be attracted to the site. Supervisor Bill Rogers saw that point and said that he is open to further discussion. The developer will prepare examples and visuals of what other size square footages look like for officials to compare and consider at future meetings.

Treasurer Hunt also said she didn’t like the idea of a potentially 5-story hotel in the commercial district. Wyett was willing nix it altogether, but further discussion indicated the possibility of reducing its size to 3-stories being more acceptable. Hunt also wanted to take extra care of residents left in the area.

Wyett said he and his team will take all of the considerations they’ve heard and put them into a revised plan to present, whether it’s to small teams of officials or another joint session. He said that while he is hoping, he is still not expecting to get shovels in the ground next year. (MK)