Funding For BAS Pack Of Dogs On Workshop Agenda 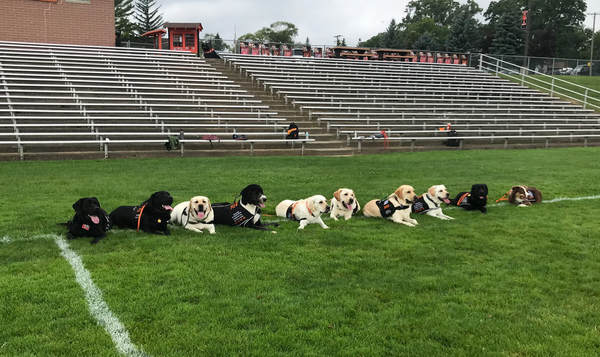 
The Brighton Board of Education will have two workshop sessions in the coming weeks.

The first will be a superintendent evaluation training session for board members, to be held on Sept. 29th at 6 p.m. at the BECC building. The second workshop will be on Oct. 11th, also at BECC and tentatively at 6 p.m. One of the subjects to be discussed is the highly successful Pack of Dogs program. The dogs are referred to as “social-emotional-learning” dogs because of the multiple purposes they serve. The program has gained state and national recognition for the Brighton Area Schools.

At the board meeting Monday, Trustee Bill Trombley said the program has been going, in effect, on a wing and a prayer and needs more stable funding than to merely rely on donations, as it does currently. Trombley asked, rhetorically, “How much longer are we going to kick the bucket?” To that question, Supt. Matt Outlaw responded that he would put the program on the agenda for the October workshop.

As a result, Karen Quinn Storey, who spearheaded the Pack of Dogs program from its inception, will be present at the workshop to discuss its impact on the school district and the various funding sources of the program, which is financed through private donations — both individual and corporate. In a related matter at Monday’s meeting, the board accepted a $1,375 donation from the Storey family for the Pack of Dogs program. Board President Roger Myers said the district is grateful for their continued support. “What Karen Storey has done individually, and her family,” Myers said, "we owe them a debt of gratitude.”

As far as is known, Brighton’s is the only therapy dog program in the country in which the dogs are actually owned by the district. Brighton has a dozen social-emotional-learning dogs in all — one for each school, except for the high school, which — due to its size — has three of the dogs.