Fowlerville Schools To Pay For Training Of New K-9 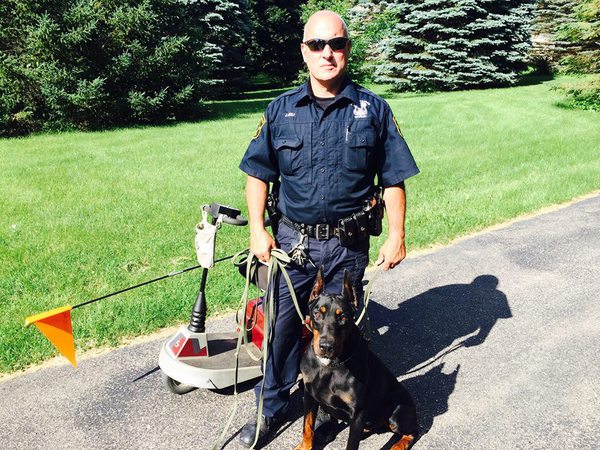 Fowlerville Community Schools has offered to pay for the complete training for the Fowlerville Police Department’s newest K-9.

Since 2012, K-9 Niko has worked alongside Sergeant Jeffrey Soli (pictured). After nearly seven years of service, the Doberman Pinscher will officially retire on June 30th, due to recent hip and heart complications. Taking Niko’s place will be a 2 ½ year old German Shepherd named Athena.

Fowlerville Police Chief John Tyler announced to the Village Council on Monday night that Fowlerville Community Schools will be paying the full costs of Athena’s training, which is expected to cost nearly $5,000. Training will consist of preparing the K-9 for duties such as tracking, handler protection, locating narcotics, and search and rescue. With the team spending the majority of their time in the Fowlerville schools, Athena will also need to be trained on how to behave around children.

Athena’s training will begin on June 26th and she will be active for duty by August. Chief Tyler says Fowlerville Community Schools offered to pay for the full training costs because of the success Sergeant Soli and Niko had in the district over the years. K-9 use has been predominantly used in Fowlerville schools for drug searches and locating runaway children. Tyler said he was very pleased to have Fowlerville Schools offer to pay for the training and is happy with the success that Fowlerville Police has had with being in the schools for over 18 years. (DF)