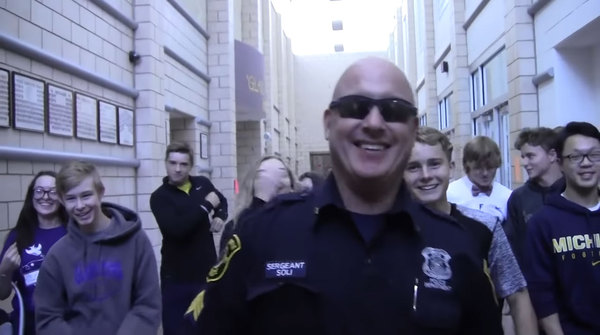 A longtime Fowlerville Police sergeant has caved to pressure for a good cause.

Sergeant Jeffrey Soli serves as the Fowlerville High School liaison officer and last July, traveled to Kansas to pick up his new partner, K-9 Hank. Also around that time, his daughter Michelle was trying to get him to take part in the lip synching challenge that many other police departments were doing. He made a deal with his daughter that if she managed to raise $500 to be donated to a good cause of some sort, then he would make a video. Well, she managed to raise $2,000 in four days and presented a check to the Fowlerville High School counseling department on Monday. Soli tells WHMI the funds will go toward suicide prevention efforts at Fowlerville High School, where students from the video production class helped him produce the video that was released Thursday.

Soli tells WHMI people have been trying to get him to do a lip sync challenge for a while and joked that he couldn’t believe people actually donated. He says they waited until school started so the video production class could assist with making the video. That happened around three or four weeks ago and the video was officially released on Thursday. Soli says the funds raised will be put to good use. He says there are a lot of kids in school that apparently don’t have insurance who need to see an outside counselor so some of the funds will go toward that. (JM)