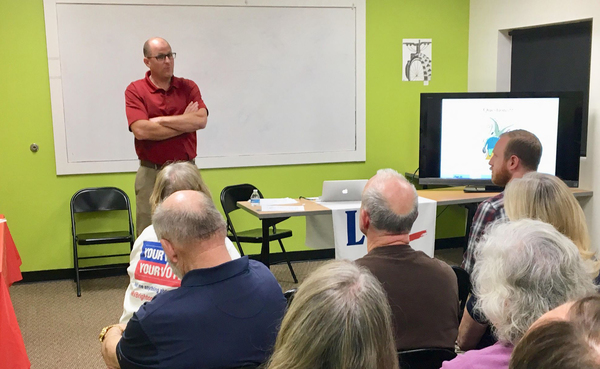 A forum in Brighton gave the community a look at how the Livingston County Road Commission operates and the responsibilities of the agency’s leaders.

Wednesday’s event at Hometown Bicycles, which was sponsored by the League of Women Voters of the Ann Arbor Brighton/Howell Unit, encouraged the public to get to know their county officials and their role in local road maintenance. Road Commission Director Steve Wasylk began by addressing what roads are actually maintained by the Road Commission, which are public roads under their jurisdiction. Roads that would be exempt from their oversight are private roads, ones that are maintained by local bodies, and freeways and “M” routes, like M-59, which are maintained by the Michigan Department of Transportation (MDOT). Wasylk says roads that are maintained by local entities through millages or general fund money is a “huge benefit” in Livingston County, noting that townships are not responsible for their roads as they don’t own them.

Wasylk then went on to discuss how the Road Commission is funded through three sources. The commission’s main revenue source is from the Michigan Transportation Fund (MTF), which is comprised of money generated by registration fees and gas taxes. The Road Commission received about $22 million in MTF funding for 2018, with the money going towards typical maintenance activities. The second funding source is federal aid dollars at about $3 million and, lastly, local contributions.

One item that was brought up by attendees that’s also been a hot button issue in the state is truck weight limits, which many feel are one of the largest impacts in terms of road deterioration. While Wasylk acknowledges the damage heavier trucks cause, he also says his personal position is that Michigan’s regulations do require more axels based on weight, which helps to spread that weight out. He adds smaller trucks carrying less freight can hurt the economy and certain industries.

Speaking to future projects, Wasylk says the Road Commission keeps an internal priority list that outlines which roads they’d like to fix should they receive an increase in funding. Wasylk says how those projects are prioritized is the cost compared to the funding received, and the condition of the roads in question. When asked why the Livingston County Road Commission doesn’t carry out many chip and seal projects, Wasylk stated that their agency doesn’t have its own unit for those kinds of projects, unlike Washtenaw County. He also noted that sometimes the cost of a chip and seal can be almost as much as an asphalt overlay, so it’s better to do improvements that will have a longer lifespan. As a point of interest Wasylk shared that nearly half the roads in Livingston County are gravel at about 641 total miles, while the total miles of paved roads comes in at about 693.

As for the obvious question of how to improve Michigan roads Wasylk says simply, “The more money we can get, the better the roads will be.” Wasylk feels the best way to do that is through a gas tax calling it a “user fee” because those that drive more will be contributing more to road improvements than those that do not. (DK)