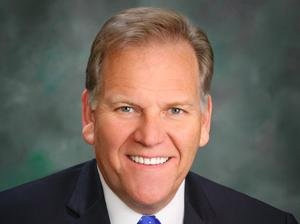 Incumbent Mike Bishop is being endorsed once again in his campaign for the 8th Congressional District seat by his predecessor, Mike Rogers.

Republican Congressman Mike Bishop has represented the district that includes Livingston, Ingham and northern Oakland Counties since 2015. Mike Rogers, the former Chairman of the House Intelligence Committee, says when he retired from Congress, the first and only person he encouraged to run in his place was Bishop.

Rogers grew up in the Howell area and is a former Special Agent with the FBI. He announced his endorsement, saying Bishop is “dedicated to national security by providing needed resources for the men and women who defend us in a dangerous world." Rogers called the Congressman a leader in tax reform, noting Bishop’s position on the House Ways and Means Committee during the bill and the incentives built into it.

Rogers feels Bishop understands the community and says the district needs somebody with his experience to fight for Michigan. Rogers says he supports Bishop’s reelection “…so he can continue his excellent representation of Michigan's 8th District."

Bishop is being challenged for the congressional seat by Democrat Elissa Slotkin, who was recently endorsed by former Vice President Joe Biden. Chris Smith of East Lansing is also seeking the Democratic nomination. (DK)