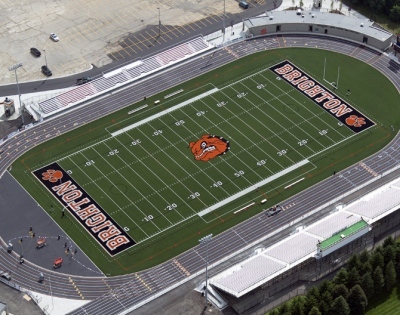 UPDATE: organizers say $620 was raised in donations and the van was filled with food donations. In addition, the I Will Right Now Foundation will also be making a $1,000 donation to Bountiful Harvest.


Normally, when you think of high schools that play each other in athletics you think of them being locked in mortal, head-to-head combat. But every once in a while, the schools discard their competitive personas and join forces for a worthy cause. That’s exactly what will happen Friday when the Brighton Bulldogs host the Hartland Eagles at 7 p.m. at the Brighton High School football stadium.

Joining together, the Brighton Area Schools and Hartland Consolidated Schools will shine their Friday Night Lights by showing generosity and serving others in need. The Bulldogs will show the Letter “G” with Generosity and the Eagles will display their letter "S" with Serve.

The schools are asking fans to bring canned goods to fill the Bountiful Harvest “Brighton Blessings” van. Plus, all youth football and cheer participants can get in free with a donation of two or more canned goods. The van will be parked outside the main gate beginning at 5:30 p.m. and will remain there until halftime. Also, “I Will Right Now” — a 501(c)(3) nonprofit organization that helps Brighton Area Schools families in need — will be matching food donations up to $1,000 to support both BAS families and Bountiful Harvest.

In addition, the Brighton and Hartland fire departments will be posting the American flag between ladder trucks as well as presenting the colors during the pre-game and national anthem.

A moment of silence during the start of the game will also honor the 20th anniversary of the 9/11 attacks.