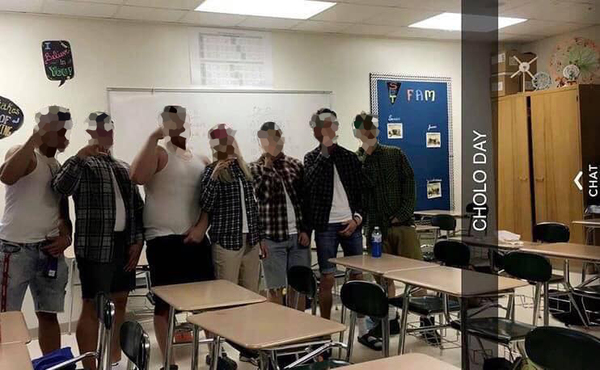 Officials from Fenton Area Public Schools are responding to a “senior prank” that is being called offensive and racist.

Several students and a staff member took part in the prank Thursday at Fenton High School, which was allegedly labeled “Cholo Day”. “Cholo” is a derogatory term that loosely refers to a young man belonging to a Mexican-American urban subculture associated with street gangs. Students and the faculty member that supposedly participated in the “prank” are said to have worn attire and flashed gestures that are representative of the derogatory term.

In a letter sent to parents, Fenton Area Schools Superintendent Adam Hartley says the Fenton High School administration was made aware of students that were dressed in such a way that may be construed as offensive and inappropriate. Administration talked with the group of students about why the clothing was offensive and directed them to change or to remove the offensive items such as headbands. School officials later learned that there were other students dressed in the same manner and pictures taken in the classroom that were shared on social media. Hartley says officials were also made aware that a staff member was allegedly participating in the “senior prank.”

Hartley went on to say that he, along with the Board of Education and the Fenton Schools community, do not condone the behavior, or any behavior that is offensive to others. He added that officials take what occurred very seriously and have already taken steps to make sure it is dealt with promptly and appropriately.

The staff member allegedly involved in the incident has been placed on administrative leave while officials investigate.