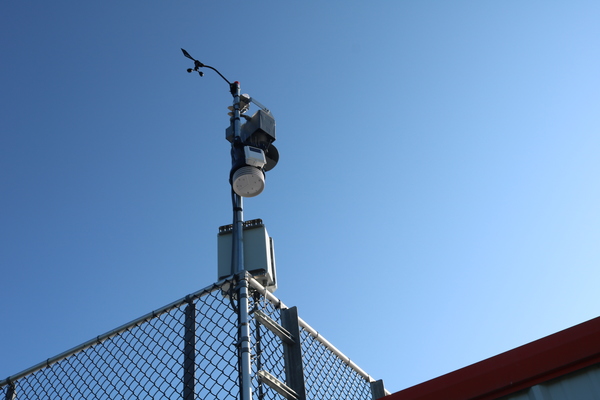 Fenton Area Public Schools now has its own personal weather station – an investment officials say is already paying off.

The district worked with Earth Networks on the venture, which provides professional-grade, commercial weather stations built to withstand all kinds of weather and provide live, hyper-local data and forecasts. The weather station was installed in mid-September in Fenton and sits on top of the press box at the football stadium.

Technology Director Kevin Powers says about two years ago the department was approached by the district’s athletic director and trainer about getting more accurate weather software or a device. He says most weather websites typically read weather from the nearest local airport, and for Fenton that meant forecasts were based out of Bishop Airport. Powers says the weather there can be drastically different than what it is in Fenton. He says because the district makes many decisions based on weather from athletic events to school being open or closed, they needed to get access to better data to make those decisions in a more accurate way. Powers says it took a couple of years to research options but everyone has been very pleased with the investment and it’s also very user-friendly. He tells WHMI they’ve been able to make good decisions based on localized data, especially for athletic events, and the new weather station has helped tremendously already this year.

Powers says there is also a lightning alert system that warns if lighting strikes within six miles of the stadium. He says if lighting strikes - either cloud to cloud or cloud to ground – then the lighting alert system will go off and sound a loud tone that covers that large radius so fans and student athletes can be safe in the event of inclement weather during outdoor athletic events. Powers says the weather station is also serving students in a variety of ways, as they get a suite of curriculum in which students can take both current and historical data from the weather station to use in class for a variety of activities. Powers says further, there’s a weather front page for the community. It’s located on top of the district’s website and Powers says the current weather and forecast is built directly from their weather station at the stadium. (JM/JK)